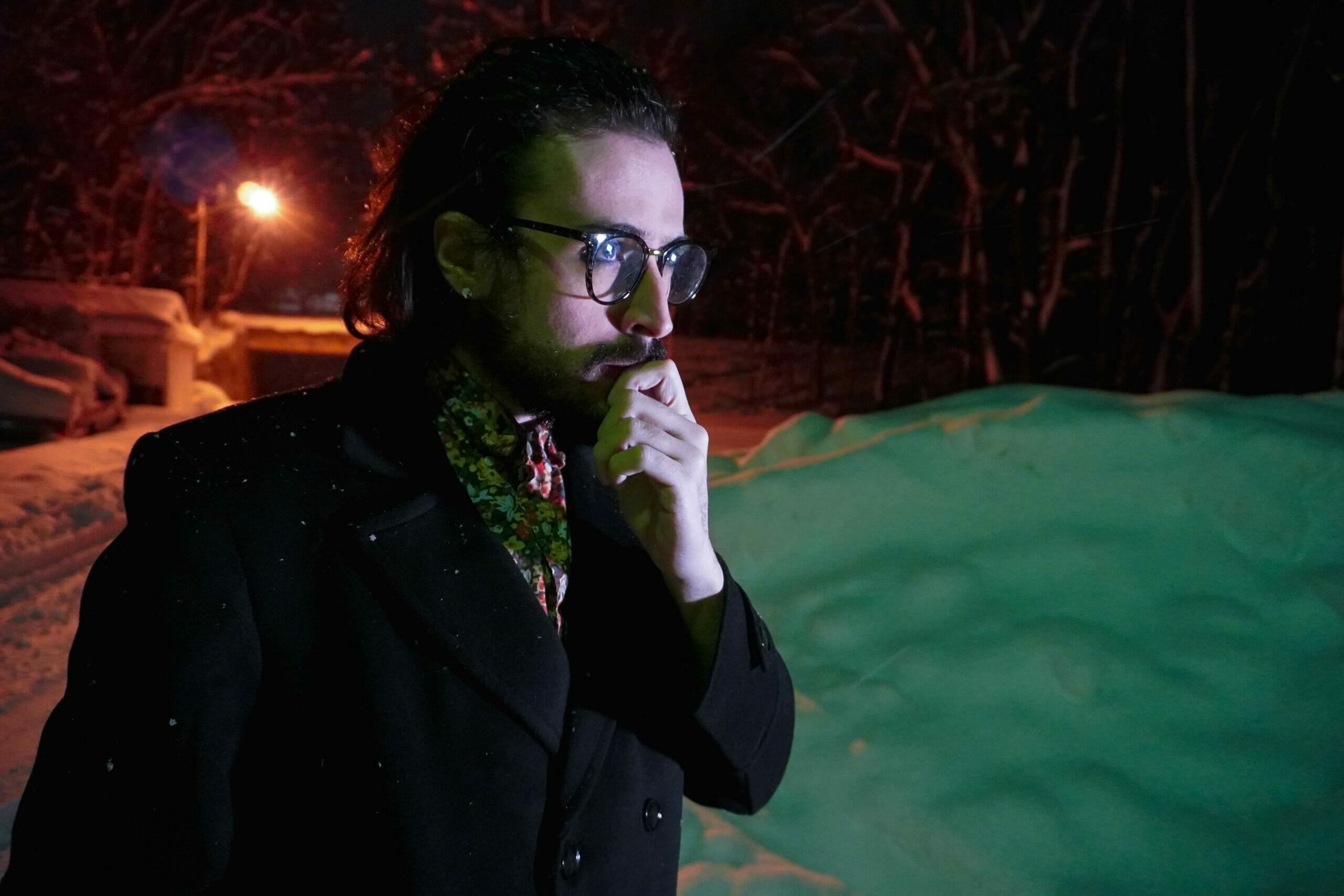 When we last spoke with singer/songwriter Will Wood, he described the process of making his pivotal decision to take a break from music to focus more on himself and his mental well-being after the release of his artistically complex album “in case i make it”. Now, the artist has treated audiences to one last hurrah as he releases a 20-track album featuring live performances from around the country. Originally a considered title for “in case i make it”, “in case i die” allows fans to feel the unfiltered emotion in Will’s chilling vocals and folksy rhythms in some of the most notable performances of his career. As Will steps away and reflects on the experiences he’s faced over the past few years, he continues to surprise fans with how introspective and emotionally invoking his music can be and has definitely made an impact with his unrelenting honesty, humility, and authenticity.

Q. Why do you think you decided to release a live album now especially as it may be your last?

A. Before the pandemic, I was becoming sort of a road warrior, playing in basements or dive bars and crashing in stranger’s living rooms and dangerous motels between eight-hour drives, but since an online fandom formed I’ve heard a lot of people describe me as an “internet musician.” Which is funny, because I’ve always considered myself a bit of a Luddite and primarily a live artist. Live performance is its own art form, and on stage, I can sort of explore the songs. The ephemeral and interactive nature of the experience creates a lot of potential for a connection and catharsis, and a sense of real presence in the moment. I want to show a snapshot of the songs a bit more as they are in the real world because I think it’s the most direct I can possibly be, and there’s no better time to do that than now.

Q. Some of the songs are described as a reimagining or a redefining of their original versions. Can you talk about specific songs that exemplify this?

A. I’d actually say that for the most part, these are the original versions, you know? There are some exceptions though, especially The Song with 5 Names, which has too long of a story (and too long of a name). There’s also Laplace’s Angel and I/Me/Myself, which I wrote on piano but present on the baritone ukulele to shift focus onto the vocals and present the songs in a new light. I think the genre shift makes the songs sound more earnest than the wacky vibe the recording does. I also really enjoy Skeleton Appreciation Day in G; it gets rid of the Tiny Tim pastiche and allows it to feel less guarded – which is definitely fitting to how I feel about the song.

Q. You said something really poignant regarding why you’re not planning to make new music anytime soon, “With how the culture is right now, how difficult it can be to feel understood, how truly brutal some people can get and not even know it, and how awful this whole thing has been for my mental health”. Can you explain how specifically societal culture right now has affected you?

A. Oh jeez, sometimes I regret being so negative. The positive parts of my career are incredible, but I don’t want to be dishonestly chipper about something that people should know is sometimes really rough. I think echo chambers & radicalizing algorithms validate people that would otherwise be lone nutters, and their emboldened vitriol, willingness to cause harm and manipulation of pop discourse kind of forces people to just shrug and go “yeah, that’s the internet” instead of “these people are hurting people.” Being a “public person” (an increasingly arbitrary distinction, as we all have public platforms and could all be “next”) exposes you to more of that. So those who are offended by others’ boundaries and rights, the sexually aggressive, the pathologically ambitious, and the attention-seekers of the world end up doing things that you could never emotionally prepare for. All that in tandem with how it can be to feel understood makes it hard to want to bare my soul.

But hey, think of how obvious it is now how messed up culture was ten years ago. Ten years from now this will be the thing we grimace at, and the people who acted this way will be pretending they weren’t part of the problem, just as it is now. Which doesn’t sound positive, but I mean it to be, honestly. There’s a lot more to it than that. I tried to simplify it as much as possible, which of course removes some of the nuance and relevant specifics, but that’s the best I could do and stay a semi-appropriate length.

Q. One of the most harmful aspects of your fame and for a lot of artists as you mentioned is the concept of the parasocial relationship. Can you describe this term for those who may be unfamiliar and elaborate on why it’s so damaging?

A. I actually pretty strongly disagree that parasocial relationships (when someone feels like they know an artist) are bad. I think relating to an artist or who you perceive them to be is often a big part of what makes art valuable to us. You don’t need to know someone the same way you know a peer in order for it to be okay to care for them. I want an emotional connection with my audience. Of course, one’s perception of an artist will always differ from their day-to-day self, and you aren’t likely to ever really know them, but the type and level of difference vary. The same thing can be said about your waiter. Artists and audiences have roles in each other’s lives, and while they can inspire difficult behavior at times, if they’re healthy they’re healthy.

The issue isn’t how you feel about a person you don’t personally know, the issue is boundaries. It’s understanding that your parasocial relationship shouldn’t be seen as and can’t be expected to be treated like a social one. If there’s a mutual attempt at engaging in something social between an artist and a fan, the influence of parasociality and author-as-character should be kept in mind, and you shouldn’t assume your knowledge of your subject is as good as true knowledge of them. That’s all.

I’ve noticed a lot of people hear “parasocial relationships are bad,” and end up believing the absence of the perceived guilty pleasure of liking a stranger is assuming they’re a monster and hating them. But that’s still a parasocial relationship, just one that is committed to being negative. I think it’s important to talk about the phenomenon and how it functions, but I think the current direction of the conversation actually does more harm than good and is one of the things that makes it difficult to feel like writing new music.

Q. Would you encourage other artists to go on hiatus as you are doing now for reasons of creative longevity or mental burnout?

A. Some people think I took a break between my 2016 & 2020 albums, but actually, I was working that entire time; touring, recording demos, Patreon, my art gallery, crowdfunding, a day job, etc. I’ve never stopped for longer than a month, so I can say firsthand it’s often very necessary. Not just for purposes of creative longevity, I’m not sure I’m going to get back into it at all, but for the sake of long-term, well-being, and mental health.

I get the sense that the cultural issues I’ve been going on about are going to have a lot of artists taking breaks or retiring early in the coming years. I think the gap between God’s Favorite Customer and Chloe and the change in tone in his interviews might say a lot about Josh Tillman’s relationship with his career. I think what people did to Mitski is strongly indicative of something pervasive too. The same thing goes for Bo Burnham’s five-year hiatus leading up to Inside. I think there are artists who are currently on a mental health break and just aren’t talking about it. So I don’t think many are hesitating to, I think we all kind of need it and know it.

Q. Even though you’ll be leaving the music scene for a while you’re still going to be appearing on Life in the World to Come with Chris Dunne. How is this a way for you to stay engaged with art while not producing anything new?

A. The podcast is Chris’s baby but I’d say my participation is still an art form and still producing something new! I’m just not in charge, which allows me to have some distance from the public and assert certain boundaries more comfortably than being “singer-songwriter Will Wood” does. My blood and guts are in my songs, sometimes in a way that can be overwhelming to share, and the workload is crushing, whereas LITWTC is just fun.

Chris gets to be crushed by the workload and handle the public, and I get to tell people my real name is Beans McSprout and that the reason I stopped telling people I have a daughter isn’t because I made her up but because he’s transitioned and is my son. Then he died. Shayfer James is my father. I killed a guy once. Disney World and Universal Studios both shut down their parks early for me and my friends so I could take Coke-sponsored selfies to promote my upcoming MCU/Beetlejuice crossover project.

Q. Is there anything you want fans to know before you indefinitely step away from music? What has been your overall experience with this aspect of your career?

A. When I say “the Will Wood persona” I don’t mean fake breakdowns onstage. I mean the super-serious and verbose eternally-suicidal curmudgeon with a rat on his shoulder who lives in a cabin in the woods with no internet. I mean the semi-real character that’s created partly unintentionally by the sort of triangular interaction between art, artist, and audience. I’m just some 29-year-old dude with a weird sense of humor and taste in music. There are a lot of wild stories and rumors out there about me and what I think and feel about my career, my work, my fans, and everything in between; they’re pretty much all gibberish. As much as I feel obligated to speak openly and candidly about the tough side of what I do, and I would say that my life since becoming more popular has been very difficult, there is no greater joy and honor in my life than performing my songs for y’all, and I’ll probably be back at it eventually. Just might be a while is all.