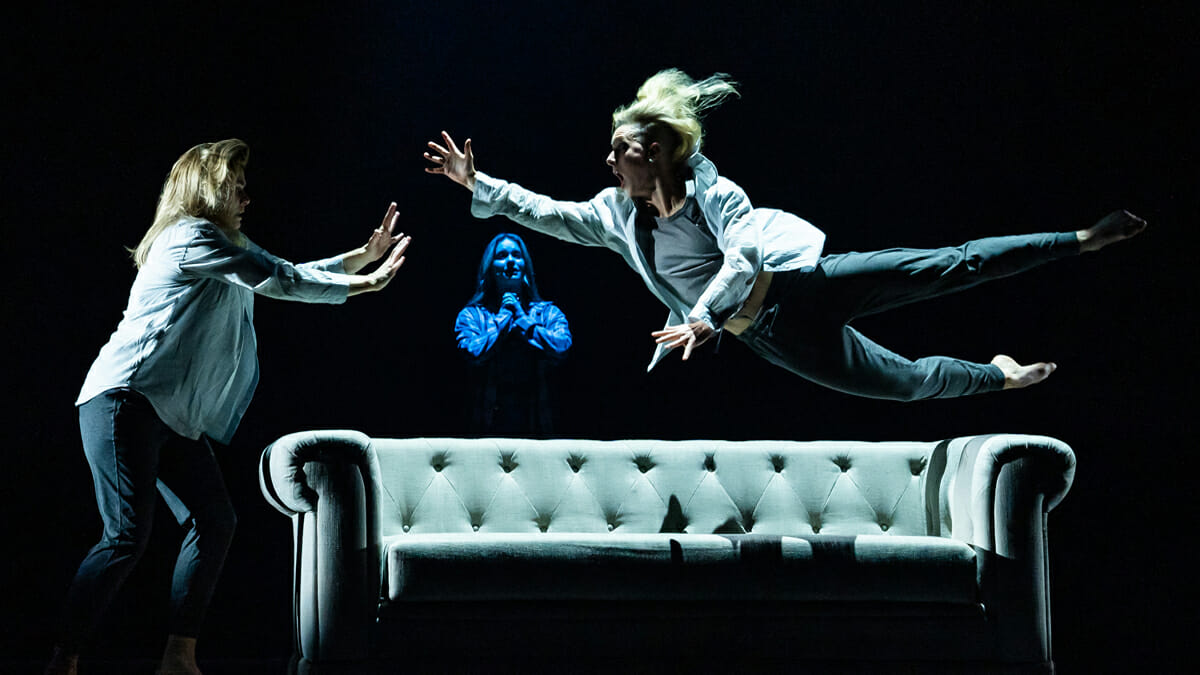 Heidi Blickenstaff fell in love with the theater at a young age, and the star of the Broadway Tour of Jagged Little Pill never gets tired of the footlights.

The show weaves the compelling and powerful music of Alanis Morissette into the story of the fictional Healy family and the challenges they face – and how they find healing and empowerment through those challenges.

She is reprising her role in the same show on Broadway as Mary Jane Healy, and proudly created the role of Katherine in Disney’s new musical of Freaky Friday for Disney Channel and Disney On Broadway.

Among her additional Broadway credits is Something Rotten! Addams Family, Little Mermaid, and The Fully Monty.

The talented actor and singer is based in New York City, and currently enjoying the North American Tour of the Tony and Grammy-Award-winning Jagged Little Pill.

Heidi enjoys traveling nationally and internationally performing concerts, teaching masterclasses, and coaching private clients. She is passionate about working with children and young adults. “As they blossom into who they are meant to be as artists and human beings.”

The Kimmel Cultural Campus and The Shubert Organization are presenting the Broadway hit Jagged Little Pill at the Academy of Music from January 3 – 15, 2023.

This musical was inspired by the seminal rock album of the same name by seven-time Grammy Award winner Alanis Morissette, Jagged Little Pill is part of the 2022-23 Broadway Series.

Jagged Little Pill is a jukebox musical featuring Alanis Morissette’s groundbreaking hit songs such as You Oughta Know, Head Over Feet, Hand in My Pocket, and Ironic.

This musical interweaves the songs with the pain of the fictional Healy family and ultimately tells their story of healing and empowerment.

The Healy’s appear to be an ideal suburban family – but when the cracks beneath them begin to surface, they must choose between maintaining the status quo, or facing the jarring truth about themselves, their community, and the world around them.

Now, even 25 years after its initial release, Jagged Little Pill continues to be one of the Top 20 Best-Selling Albums of All Time. With ten eclectic and acclaimed albums released over the subsequent years, Morissette’s music has garnered 7 Grammy Awards (with 14 nominations), a Golden Globe nomination, and total sales of over 60 million albums.

“Nominated for more Tony Awards than any other musical in its season, Jagged Little Pill is a beautifully constructed show, weaved together through the work of songwriting genius Alanis Morissette,” said Frances Egler, the Senior Director of Programming and Presentations on the Kimmel Cultural Campus.

“We’re thrilled to host the Philadelphia premiere of this work,” she added, “another outstanding production from acclaimed director Diane Paulus, whose other contribution to our season is the revived and reimagined 1776.”

Jagged Little Pill opened on Broadway on December 5, 2019, at the Broadhurst Theatre after beginning previews on November 3. It was nominated for 15 Tony Awards, including best musical.

Prior to Broadway, Jagged Little Pill completed a record-breaking, sold-out run at the American Repertory Theater (A.R.T.) in Cambridge, Mass.

The production contains strong language, adult themes, drug use, and moments of sexual violence that some may find triggering. Jagged Little Pill addresses many topics of contemporary life, including sexual assault, opiate addiction, transracial adoption, gender and LGBTQIA+ identity, marriage struggles, and mental health. Read on for some additional context that will help set the stage as you experience this Tony and Grammy Award-winning new musical.

What do you love about this show?

Heidi Blickenstaff: There is so much to love. I love Alanis’ music; I am, a huge fan. I am psyched to be singing her music. The creative team for this show is extraordinary. The story is definitely a timely one for the world that we are all living in together. I think a lot of people can relate to it. When I first read it, it felt like something important. I feel like I am the luckiest artist in the world!

Tell me about life performing on tour.

I spent at least a decade on tour in my 20s; the beginning of my professional career, starting with the Who’s Tommy on tour. This is my 7th or 8th tour.

Was it a difficult decision to tour again?

Yes, I wasn’t so sure that I wanted to tour again. I work in New York and I have a family there. So, it’s been hard to carve this time out to go back out in the road. My stepsons are in college now, so the timing was good. And this material is so good. And I wasn’t quite done with it after performing the same role on Broadway. My husband is an entertainment attorney and lucky for me he figured out how to be completely mobile. So, we are on tour with our dog, a rescue terrier mutt, having an adventure.

I know this can be a difficult life, but what is the upside of being on tour?

This tour started out on the west coast. Our first few months were spent in L.A. San Francisco and Seattle. My family is all from California. So, when I was doing the show in New York they were not able to go there to see me because it was during the pandemic. I was heartbroken and then Jagged Little Pill had to close, which cut the deepest for me.

When they started making noise about the tour starting in California it was very intense and meaningful. We are all so proud to be bringing this show to all of the people we didn’t get to see in New York. What I love about being on tour is that you become a family in a different way than a Broadway family. These “kids” are mostly in their early 20s, and they are so talented.

When you are doing a tour. You become a family which is different than your Broadway family. These kids, mostly in their early 20s, and my dressing room is a revolving door of people coming in to share what is going on in their tour lives. I feel a bit like “Mama Bear” ushering them through this crazy thing together. I feel so happy to be with them on this glorious adventure.

How is this tour different from your previous ones?

When I was in my 20s and I was touring I didn’t have the same responsibilities that I have now. I could roll out of bed and be prepared. Now I have to protect my voice and my body. So, for me, there is no drinking alcohol and no staying up late. The show is so intense for me. It is such an emotional roller coaster. Every second I am not on stage I protect my body and my voice.

What is it like performing on a Broadway stage?

It is something I definitely wish every single human being could feel. When it is good there is nothing like it. Thousands of people have shared experiences with you and you are the conduit by which they are hearing this story. It’s big. It feels wild, huge, extraordinary, scary, and thrilling and at the end, they clap for you. It feels like a big rock concert. A lot of hard work. it doesn’t come magically there is a lot of hard work involved. It is an accumulation of a lot of feelings like you are pushing a boulder up a pretty exquisite mountain.

Talk about your dream as a young child.

I dreamt of doing this from the time my mom told me there was a Broadway, and she took me to see Jesus Christ Superstar in Chicago. I was six years old. I was singular in my approach to getting there. I went to performing arts high school and took all of the lessons you need to take. It was the perfect thing a kid would dream of.

What advice do you have for someone who aspires to follow in your footsteps?

It doesn’t come without heartache and rejection. Now that I’ve been in the business a few decades I know the harsh realities of a show closing. After all of this time, I still feel gobsmacked that I get to do this.

I am doing the thing I dreamt of doing as a little kid and not many people get to do that. I love it, but it is hard but I love it. I teach a lot and I talk to my students a lot. The best piece of advice I can give any young actor coming up is to try their very best to be themselves in this business. The actors I admired when I was younger were Emily Skinner, Alice Ripley, and Rebecca Luker. But in my 30s I realized that no one was going to be better at being me than I was. So, I would tell anyone to embrace the aspects about you that are only yours.

Why do you want my readers to see this show?

Bringing this story around the country feels extremely significant and important. This has Alanis’ beautiful music in the background while tackling so many issues that so many people are grappling with. I believe every audience member will identify with at least one of the characters.

Jagged Little Pill is recommended for ages 14 and up.

Please visit http://www.jaggedlittlepill.com/resources to learn more about the show’s partner organizations, which have countless resources that speak to the many topics covered in the show.