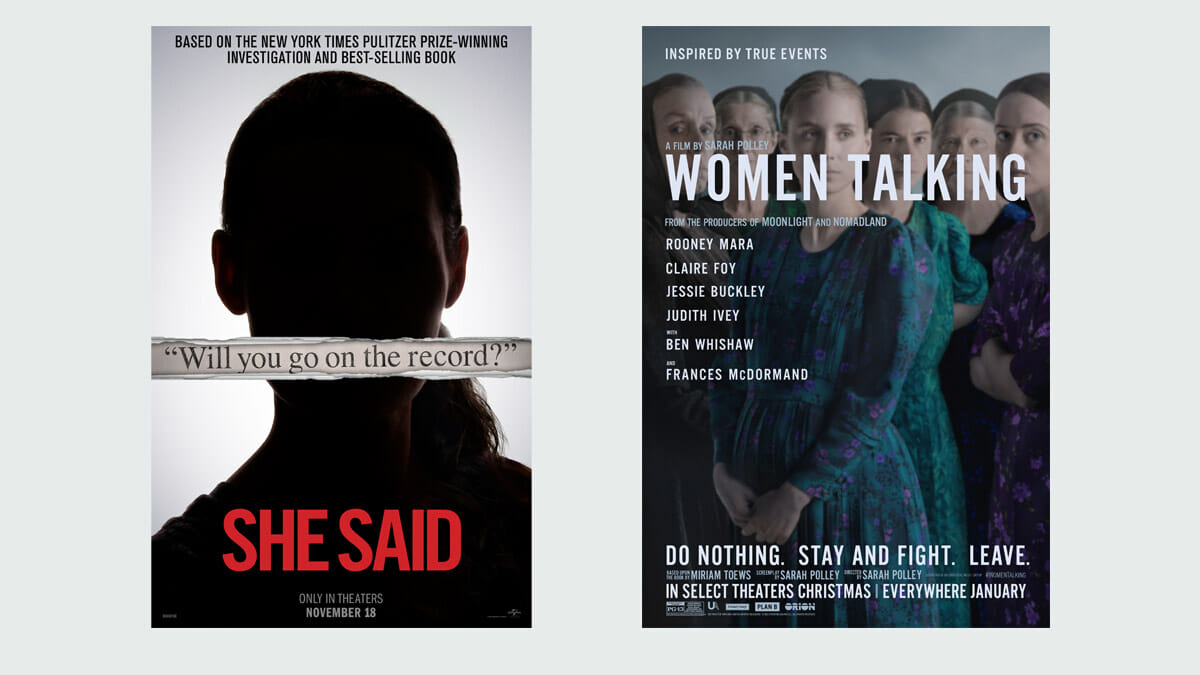 Every once in a while we see one or two movies that move us emotionally and make us feel compelled to announce to the world how thought-provoking and life-altering the screenplay, acting, directing, and other aspects of the film are.

And this is the case with the 2022 slate of movies that include She Said and Women Talking; which took the prize for Best Movie About Women and Best Movie By a Woman from the Women Film Critics Circle 2022 Awards.

She Said, an American biographical drama,  was directed by Maria Schrader and written by Rebecca Lenkiewicz, and is based on the 2019 book of the same name written by New York Times reporters Megan Twohey and Jodi Kantor. They break one of the most important stories in a generation — a story that helped ignite a movement and shattered decades of silence around the subject of sexual assault in Hollywood. The movie stars Carey Mulligan and Zoe Kazan.

Some of the other noteworthy movies include Good Luck to You, Leo Grande, Everything Everywhere All at Once, and The Whale, and the two best TV series about women were a tie for The Handmaid’s Tale and Yellowjackets.

Women Talking is based on a riveting 2018 novel by Miriam Toews, that was inspired by real-life events that occurred in 2010 at the Manitoba Colony in Bolivia. The film was directed by Sarah Polley and stars Rooney Mara, Claire Foy, Frances McDormand (who also produced the movie), Judith Ivy, Jesse Buckley, August Winter, and Ben Whishaw. The women in the colony feel like they have three choices: do nothing. Stay and fight. Or leave. This is after years of emotional and physical abuse and violence from the men in the colony. The women of an isolated religious community grapple with reconciling the brutal reality of their faith.

BEST MOVIE BY A WOMAN 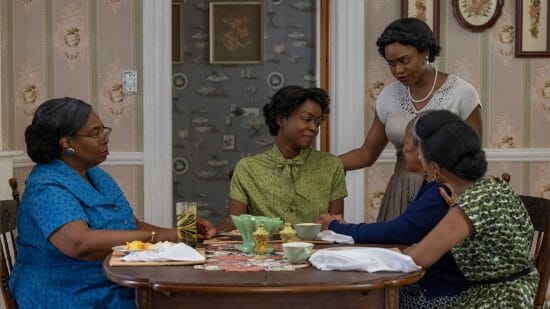 A scene from the movie, Till. Photo Credit:  Lynsey Weatherspoon / Orion Pictures

WINNER: Michelle Yeoh – Everything Everywhere All at Once

Ke Huy Quan – Everything Everywhere All At Once

BEST FOREIGN FILM BY OR ABOUT WOMEN

“When I am making films, I never think about how people will perceive it or the awards that may come. The pleasure of making films is in playing with light and shadow and creating emotion out of it. But whenever an award comes my way, it gives me inspiration for creating more cinema,” Fil Director Amitabh Reza Chowdhury. “Rickshawgirl is not just a film for me, it’s my journey to understand and celebrate the multitude of courageous and resilient Bangladeshi girls who fight for dignified survival every day. Thank you Jury board for this appreciation. Thank you, my beautiful Naima, Novera Rahman, my producers, and my team for riding with me on the Rickshawgirl journey.”

BEST DOCUMENTARY BY OR ABOUT WOMEN

Gabby Giffords Won’t Back Down

BEST EQUALITY OF THE SEXES

WINNER: Michelle Yeoh and Ke Huy Quan – Everything Everywhere All at Once

TIE RUNNER-UP: Dead to Me

*KAREN MORLEY AWARD – For best exemplifying a woman’s place in history or society, and a courageous search for identity

The Drover’s Wife: The Legend of Molly Johnson

*ADRIENNE SHELLY AWARD: Adrienne Shelly was a promising actress and filmmaker who was brutally strangled in her apartment in 2006 at the age of 40 by a construction worker in the building after she complained about the noise. Her killer tried to cover up his crime by hanging her from a shower rack in her bathroom, to make it look like suicide. He later confessed that he was having a “bad day.” Shelly, who left behind a baby daughter, had just completed her film Waitress, which she also starred in, and which was honored at Sundance after her death.

*JOSEPHINE BAKER AWARD: The daughter of a laundress and a musician, Baker overcame being born black, female and poor, and married at age fifteen, to become an internationally acclaimed legendary performer, starring in the films Princess Tam Tam, Moulin Rouge, and Zou Zou. She also survived the race riots in East St. Louis, Illinois as a child, and later expatriated to France to escape US racism. After participating heroically in the underground French Resistance during WWII, Baker returned to the US where she was a crusader for racial equality. Her activism led to attacks against her by reporter Walter Winchell who denounced her as a communist, leading her to wage a battle against him. Baker was instrumental in ending segregation in many theaters and clubs, where she refused to perform unless integration was implemented.

*KAREN MORLEY AWARD: Karen Morley was a promising Hollywood star in the 1930s, in such films as Mata Hari and Our Daily Bread. She was driven out of Hollywood for her leftist political convictions by the Blacklist and for refusing to testify against other actors, while Robert Taylor and Sterling Hayden were informants against her. And also for daring to have a child and become a mother, unacceptable for female stars in those days. Morley maintained her militant political activism for the rest of her life, running for Lieutenant Governor on the American Labor Party ticket in 1954. She passed away in 2003, unrepentant to the end, at the age of 93.

THE INVISIBLE WOMAN AWARD
[Supporting performance by a woman whose exceptional impact on the film dramatically, socially or historically, has been ignored]

*The Gotham Awards. For removing the category Best Actress, in the further erasing of women.

*Anatomy Citation. “It doesn’t matter how much I do, I’m still not going to get paid as much as that guy, because of my vagina.” – Jennifer Lawrence speaks out against the continuing literal shortchanging of actresses – regarding Lawrence paid five million dollars less than Leonardo DiCaprio for Don’t Look Up, and less than the male cast Bradley Cooper, Christian Bale and Jeremy Renner for American Hustle.

*Cringe Citation. Harvey Weinstein’s shameful audiotape recordings. And being reminded of them/him in ‘She Said.’
*Too Much Information Citation: Emma Thompson, for Good Luck To You, Leo Grande.

*Blonde. For depicting only the worst fantasies about Marilyn Monroe, and none of her beauty, grace and intelligence.

*More Blonde. A film that re-exploited Marilyn Monroe and made me feel bad for her. She never had a chance in a man’s world, and this film exploited her again through unnecessary explicit scenes.

*And More Blonde. An overrated actress romping through the film exposing herself. And why the constant showing of embryos, is it to champion pro-lifers.

*Even More Blonde. Completely inaccurate. The portrayal of the actress is shallow and cliched, and the part of the speaking embryo comes across as a disquieting anti-abortionist statement.

*She Said. A drama about the NY Times investigation into the sex charges against Harvey Weinstein, ‘She Said’ comes off more as a self-congratulatory promo for the NY Times, than an emphasis on its victims. And intimating a kind of damage control there for its own numerous scandals – the weapons of mass destruction hoax, and most recently calling for the release of Julian Assange –  without an apology for the paper’s media participation in orchestrating his incarceration.

*The Cannes Film Festival. For disrespecting credentialed Deadline critic and distinguished WFCC member Valerie Complex, treating her with racist implications as an intruder there.

* Shame On DOC NYC. For announcing then scrubbing the name off their public list, secretly inviting as the guest of honor a cinematographer from the Ukraine Neo-Nazi Azov Battalion, Dmytro Kozatsky, who sports Nazi tattoos, and is fond of creating photographs of swastika-carved pizzas. While dragging out from the premises a young woman protesting the event.