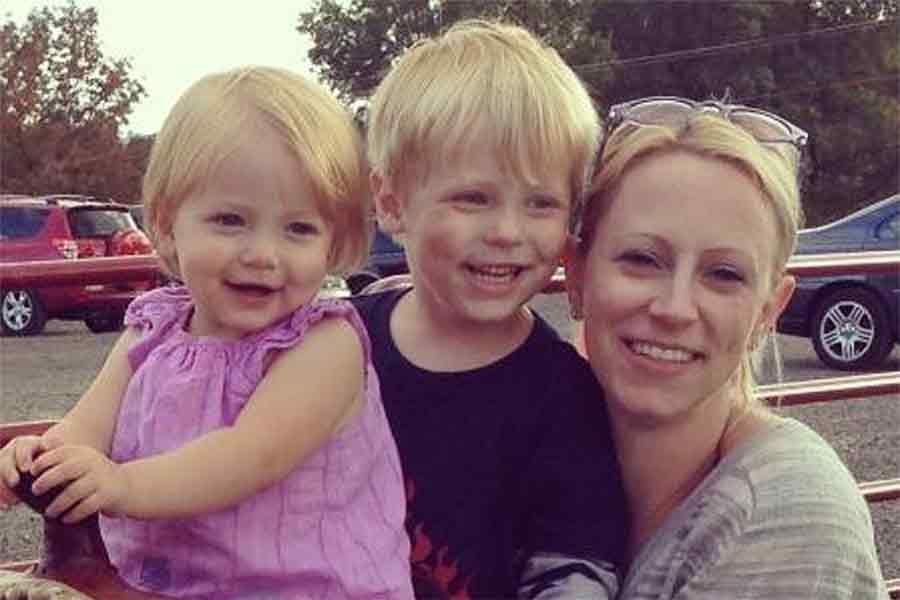 Interview with author of “A Taste of Plant Based” Kris Ernst

Doylestown, PA-based mom Kris Ernst didn’t have time for complicated, redundant, vegan recipes, so she made her own! Now the author of “A Taste of Plant-Based”, a vegan-centered cookbook, Kris is sharing her delicious creations and showing food lovers that you don’t need meat to craft a mouth-watering meal. In today’s busy climate, Kris and her productive family, who are all vegan, recognize the perceived difficulty in cultivating the right vegan dish as many feature specialized ingredients or spices to take the place of meat. So for this holiday season, Kris is selling a starter-kit gift set on Etsy featuring “A Taste of Plant Based” plus five spices for customers to start their vegan journey off a little easier. The cookbook, stylized in the fashion of vintage recipe notecards and colorful apron-print graphics serves not only as a perfect gift for families but also for anyone who wants to start making small changes to their diet and life.

Q. You made the life-changing decision to go vegetarian when you were just a teenager after watching a PETA video. Tell us about this experience.

A. I must’ve been about 14 at the time and I saw this PETA video and it was showing how they caged the chickens and how they prepped them to go to slaughter. It was just horrifying to me and I was like I can’t eat these poor birds. I had already stopped eating red meat because I didn’t particularly care for it and then I saw that and said ok that’s it I just can’t do it. Cut to years later and my husband who was always a meat eater, saw the documentary What The Health? He watched that and it affected him so much that he was like that’s it, I’m committing to being vegan which was great because I used to have to make a vegetarian meal, a non-vegetarian meal, and something my kids would eat.

It was just a struggle to cook. So now I only had to cook one meal. And I said to my husband, great I’ll go vegan with you! But I’m conscious of not being preachy at all. I don’t want anyone to feel uncomfortable eating meat around me. I want them to do what they want to do. There’s like a stigma [with veganism] that you’re a health fanatic or you’re strange because you don’t eat certain things but it’s really not that difficult and that’s what I wanted to put together. Easy recipes that still taste really good and like you’re eating meat or you’re eating your favorite recipes, they just happen to be vegan.

Q. Veganism is not for everyone but many scientific studies show numerous health benefits-physical and mental by eating less meat. How has cutting meat out of your diet changed your health?

A. I can say that maybe not too much for my health but after my kids chose to go vegan with us I think they could tell that their energy level was different. Even my daughter, she’s 10 and she plays travel soccer and she’s a beast. She’s so physically fit and there’s nothing that I’ve seen that’s been detrimental to their health. You’re eating more vegetables and more fruits and staying away from more processed foods and meat. I think there’s a lot of formulas that go into meat these days so we’re trying to avoid the hormones in meats.

Q. Your cookbook, A Taste of Plant Based has a cute title and colorful graphics spread throughout its pages. How do these design choices expand your audience?

A. The designer of the cookbook, Rebecca Trauger, is amazing. I asked her if she wanted to take this journey with me and help me design a cookbook and she said what are you thinking? I said I want the cookbook to have oversized old-school recipe cards that are like back in the day when people used to exchange recipe cards but I want them to be big enough so people can actually read them. I wanted it to be very uncomplicated. There’s no stories in there, just straight-up recipes, ingredients, and that’s it. Because it’s like a vintage-y feel with old-school recipe cards, I wanted the graphics to look like vintage aprons. I wanted a vintage apron, colorful, like all-over print and she nailed it. It was exactly what I wanted.

There are cookbooks that drive me crazy, like the story about the recipe and where they found the ingredients and how they plate it and I’m like no, I’m a mom. I have two kids and I work full time. I just need efficiency. Tell me what I need and how to make it and that’s it. When we all went vegan I would find tons and tons of recipes online and I would find one or two that everyone in the family liked but then I couldn’t remember where I found the recipe and that was super frustrating for me. After finding like hundreds and hundreds of recipes and tweaking them and making them work for my family, I was like ok I need to put them all together so I don’t lose them and that’s how this cookbook came about.

Q. You’re selling a gift box on Etsy this holiday season that includes the book and a variety of spices to help customers start their vegan cooking journey. Talk about the production process of this super fun gift.

A. I wanted to provide the customer with some spices they may not have in their cabinet already. Not too many people that aren’t vegan have nutritional yeast. I picked spices that are scattered throughout my cookbook so if they open the recipe and go oh shoot I can’t make this cause I don’t have ginger, now they have a starter pack. There’s also a five-piece measuring spoon because maybe they don’t have measuring spoons. My niece is in college and this is perfect for her because she barely has anything in her cabinets and so now she has a bunch of spices and a cookbook with super easy recipes. I just think it’s great to bring in that college kid audience and people who are just starting out. Maybe young couples who don’t know what to cook for each other and this is something easy they can do together. 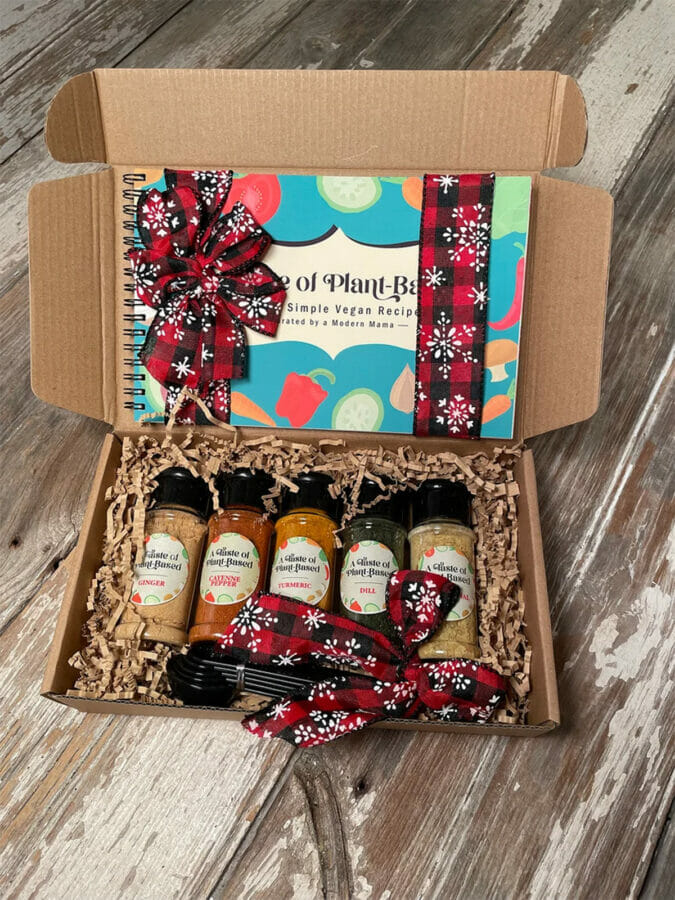 Q. Is there a personal favorite dish of yours in your cookbook?

A. One of my go-to’s is something super easy. It’s called chickpea and veggie medley. The reason I love it is that it takes under 30 minutes and you can double the recipe if you want to make it in a batch. It’s like a base for whatever vegetables in your fridge that you want to get rid of. You don’t have to use a zucchini you can use like a pepper or whatever. When you haven’t gone to the grocery store in a while and you have a couple cans in your cabinet like a can of chickpeas and a can of tomatoes and that’s it. The rest is like garlic and spices and you can serve it over rice, you can serve it over pasta, or crusty bread. Whatever you have. I like that recipe for that reason. It’s like the “oh shoot I have nothing to make so what do I have recipe”. It’s just simple and delicious.

Q. What is your advice to those who aren’t ready to completely cut meat out of their diet but want to start making small changes?

A. This cookbook is perfect for you because it’s not intimidating. You can make a veg-pledge to not eat meat like once a month, start little. Then if you’re enjoying it you can go to like a meatless Mondays situation. To be quite honest with you, there are people who buy this cookbook and switch out the recipes if they have a meat-eater coming to town. They’ll take a recipe that has tofu in it but instead, they’ll throw chicken in it. You can definitely alter it for your audience. So yeah, take it slow, do it once a month.