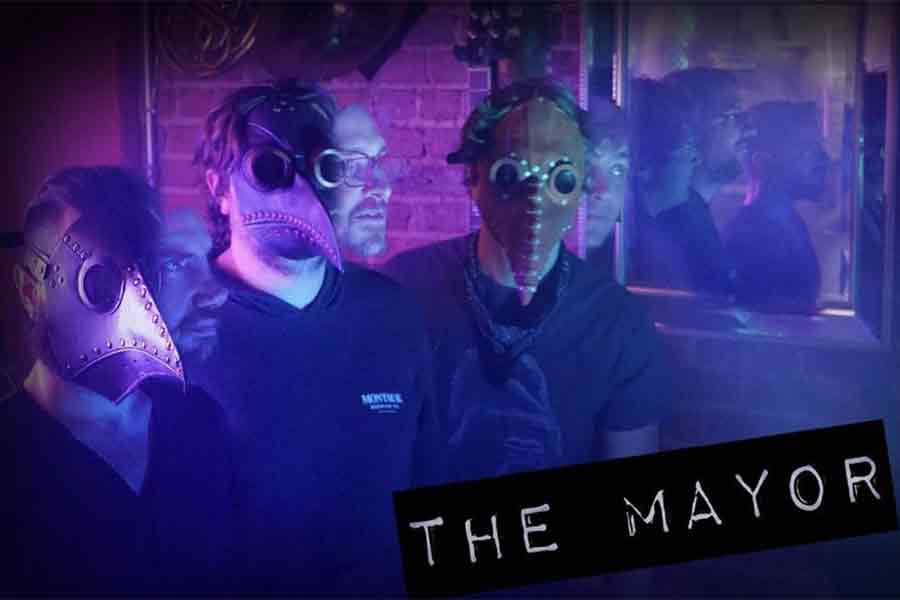 Interview with Metal Band The Mayor

Live At The Acropolis is the latest EP from The Mayor which is less of a band and more of a group of childhood best friends getting together to play whatever their hearts desire while, of course, worshiping Greek composer Yanni. With Mike (Tyson) Abiuso on vocals, Kevin (Bacon) Otto on drums, James (Bond) Ryan on guitar, and Joe (Pesci) Occhiuti lending his bass talent to a couple tracks, Live At The Acropolis provides an unstoppable force of a listening experience that any fan of metal will enjoy.

The guys are already eager to hop back into the studio and create even more speaker-bursting tracks, especially now with the help of Kill Iconic Records to which they were recently signed. Only time will tell if they manage to stay true to their declaration that “The Mayor plans to drain their bank account by hitting the studio every day for the next 10 years until the next single is complete”, we doubt that it will take that much time for the close-knit group to debut something just as violently energetic as Live At The Acropolis.

Q. First of all, I think it’s a true testament to all of your humor that on your website you’re introduced as famous people that share your first names. Talk about where the idea for this came from.

Mike: I think there’s a name for that amount of time. I think we were in my mom’s basement almost two decades ago.

Kevin: I think it was our way of saying these are famous people but they’re not The f****** Mayor so we’re gonna take their names. We’re gonna show them who’s boss (laughs).

Q. Mike, you mentioned a lot of Live At The Acropolis is inspired by the resulting frustrations from the pandemic. Can you talk about this and other points of inspiration?

A. Mike: The three of us were not working so we just hunkered down in the studio and wrote a song a day.

Kevin: I would say I was pretty frustrated and making this record was like an amazing outlet for me to go and spend some time outside of my house and bang on some drums which I hadn’t done in years. I think that kind of came through in the recording.

James: I will agree that once we came together it was really something. Especially at Behind The Curtain, Mike’s studio. It’s like a playroom where you forget everything; it’s all right there.

Q. This EP was recorded over five days which is insanely impressive. What was your favorite song to record?

A. Mike: I actually found a bunch of footage of songs that we didn’t finish, just things that we tried out. There was one day where we tried to figure out for quite some time how to say “Yanni” in morse code and then we took that and tried to make the rhythm. We utilized it as much as we could and it turned into something.

Kevin: I think my favorite song is “Quit While You’re Ahead”.

James: A lot of this was written on the spot. At the next session, we might’ve screwed around with something we’d recorded already. It was mostly just writing on the spot. I wouldn’t even call an idea we brought in half-baked; it was just making the dough.

Mike: What I think was cool about the experience was that we didn’t have any goals or expectations. We weren’t like “hey we’re gonna make a record and try to release it” we were like “hey let’s get together and see what happens”. I mean we knew we were gonna record because it’s fun to record but we had no anticipation of finishing anything necessarily or putting out an EP or a record and how far it’s gotten is kind of impressive to me.

Q. Metal is a very niche genre and it doesn’t seem to get the attention it deserves. Was that considered while making this EP?

A. Kevin: We all listen to some metal but I don’t think it’s any of our primary listening pleasure kind of music. I love it, I love playing it but I don’t know. There is something worth mentioning as far as the musicianship of metal. I mean there’s so many different kinds of metal. We’re kind of borderline punk almost sometimes.

James: I’d say we’re kind of picky. I can list on one hand the metal bands I listen to regularly. I straight-up love The Locust from San Diego. It’s funny because I’ll listen to them and then for example I’ve never been a big Metallica fan but I know for a fact that a lot of the metal that I do love would not be in the state that it’s in if those members didn’t love Metallica and what they had done.

Q. Who are some of your favorite metal bands?

A. Kevin: People who are gonna listen to this record and like it are gonna know right off the bat that Converge is probably our number one most favorite metal band. There’s just no doubt that we’re extremely influenced by Converge. I’ve been listening to a newer heavy band called Vein, they’re awesome. Oh, and the most important influence The Mayor has is Yanni. He is a man, a myth, and a legend.

Mike: He is what drives this band.

Q. You’ve recently signed on with Kill Iconic records. What’s it like to be working with them?

James: We’ve only been working with them for [a couple] days but I’m sure the thrill ride will pick up. Mike has put in so much effort with this guy Joe who’s one of the heads there.

Mike: Yeah Joe and I used to be in a band together. He played bass on this album on three songs and he’s also one of the higher-ups at Kill Iconic. He currently is the bassist of a band called Ice Nine Kills.

Q. Even though Live At The Acropolis was just released I’m sure you guys are already thinking ahead. What’s down the road for The Mayor?

A. Kevin: I think we’re definitely gonna get back in the studio soon. We’ll see how this EP goes and yeah, I think a full-length is in order.

Mike: It takes a day to crank out a tune so we just have to find a day.