Oklahoma! Star Sasha Hutchings Urges Us To Realize, ‘It is a Great Time For Us to See Live Theater!’ 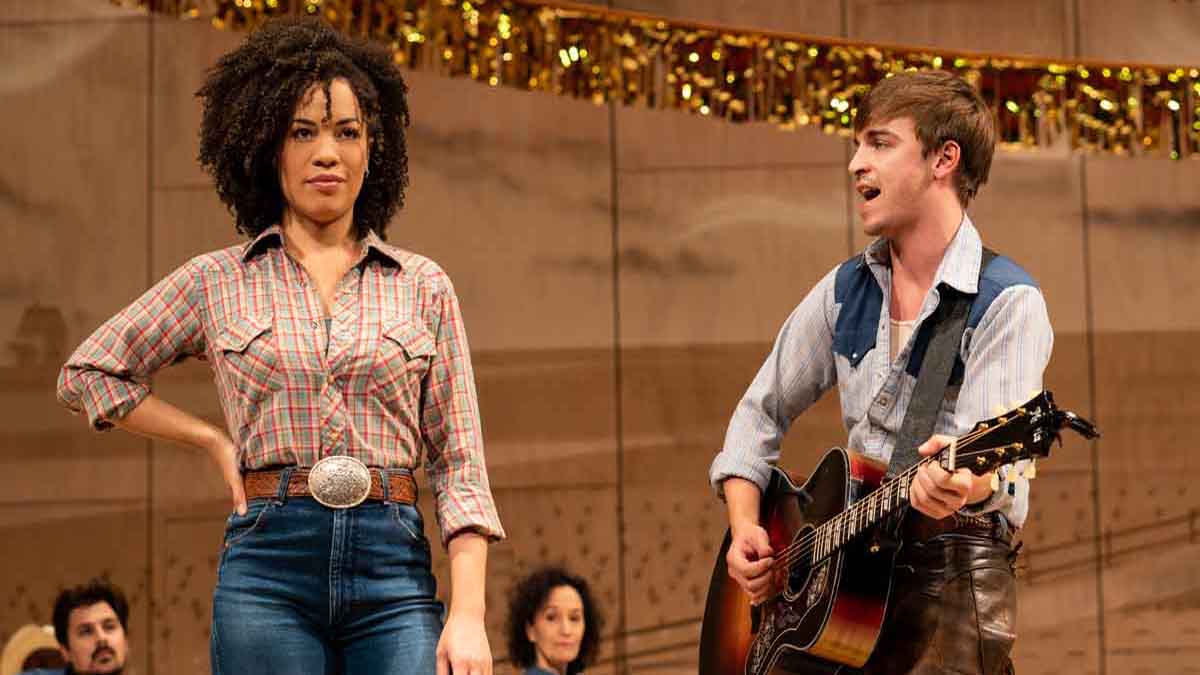 With an open stage, a time-honored musical score, and a great deal of heart, Oklahoma! has moseyed into Philadelphia through March 20 for our great entertainment.

The celebrated iconic piece of musical theater that has united audiences with the idea of a perfect America is currently delighting audiences at the Forest Theater.

Ironically, Rodgers & Hammerstein’s Oklahoma! first played the Forrest Theatre in 1945 and before the current run, the show last played the venue on October 6, 1979. Oklahoma! won the 2019 Tony Award for Best revival.

In the leading role of Laurey Williams is Sasha Hutchings, an original cast member of Hamilton, who can also be seen in the highly-acclaimed Hamilton film on Disney +.

The additional Broadway credits for 31-year-old Hutchings include My Fair Lady, Rocky, Motown, and Memphis. Hutchings appears as Hope on the premiere season of Run the World currently streaming on Starz.

Her TV credits include Paula Kelly on Fosse/Verdon, The Bold Type, Jessica Jones, Master of None, Blue Bloods, The Dangerous Book for Boys, and Smash.

Hutchings is an associate with Pink Cornrows, a social impact firm focused on making equity real. She is also a teaching artist with the Arthur Miller Foundation, Epic Theatre Ensemble, and New York City public school theatre programs. She holds a BPA in Dance Performance from Oklahoma City University.

Oklahoma! has long been celebrated as an iconic piece of musical theatre, uniting audiences with the idea of a perfect America.

But viewed anew in the context of a country still struggling with racial, economic, and gender equity, sharply divided by political beliefs, this production pushes back on the notion of a perfect nation – instead of suggesting the idea that America is still very much a work in progress.

The cast is made up of actors of different races, backgrounds, sexualities, gender identities, religions in a company of storytellers reflecting the rich diversity of America.

Read on to find out more about Sasha Hutchings and Oklahoma! 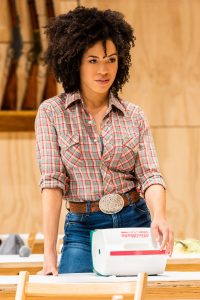 How is this show different from other productions of Oklahoma!?

Sasha Hutchings: So many wonderful ways. There is an open stage, perfect for a picnic. All of us enter the stage together. The actors are wearing jeans, shirts, and cowboy boots. It is Western in style and not that removed from walking around Oklahoma today. I am very comfortable on stage and I love my outfit. It is something that I could very easily wear to a concert or a dance. There is a 7-piece bluegrass band. Many of us do not look like anyone in the movie. There are quiet moments and bright moments. You may know the words, the scenes, the script, the lyrics, and the melodies because those things have not been altered at all; but this is a wonderful opportunity to hear them anew.

What is it like being back on the stage after pandemic restrictions?

Sasha Hutchings: To be able to return to the stage is awesome, but we are still dealing with many factors, including stringent social distancing practices. There is travel involved and the added risk of exposure. We knew if we had too many sicknesses, we wouldn’t be able to perform, so we worked really hard to be able to put the show-up. We are seeing similar experiences in Philadelphia, Alabama, Detroit, and Oklahoma City, with audiences coming back and experiencing live theater for the first time in a long while.

It has been a difficult and uncomfortable time and how we interact with each other and how we take care of ourselves is so important. It’s been a tough time for all of us; so many people are tired of wearing a mask, but like me are worried about loved ones. My mom is in Georgia and I worry about her health and exposure and I hope people are protecting her. We are all exhausted and weary because it has been a been while we could walk in and take a deep breath and smile at someone. I love that 3,000-4000 people are coming together in a theater. Communication with the audience is so important. We are trying to get back to the intimacy of a shared theater experience as this provides. We appreciate that the people who come to the show have taken a risk and we are all extremely grateful for everyone who spends his or her money and decides to spend an evening with us.

What is your performing history?

Sasha Hutchings: I started dancing at age 3. My mom put me in dance lessons to give me something to do and it stuck. I loved moving. Being able to learn a new skill with my body at young age was awesome. I also love moving to music and dancing with other people so being in the theater made perfect sense. It is about it everyone coming together, dancing and singing and creating a world.

Do you have a favorite type of music to dance to?

Sasha Hutchings: I love dancing to soothing jazzy, and bluesy music, slow somber ballads, and being able to portray those things through art. It was a fun thing to do as a kid. You don’t have words or an understanding of feelings or a mood. What dancing as a child gave me was the opportunity to learn discipline, imitation, and practice something tangible. I couldn’t play sports, yet dance helped me learn my physicality.

Is what you are doing and creating what you hoped for in your 20s?

Sasha Hutchings: Yes. What’s tough about your 20s and graduating and entering into any field – you can have dreams and expectations – you have to leave room for both pleasant and unpleasant surprises. Art, theater, and performance are by no means a straight and narrow road.  Requires a bit of flexibility. Moments of Hamilton, I could not have dreamed this up. Chose to move to NYC – this show – how good it feels to step into this show every night. It feels like a great pair of jeans. I love putting it in. these moments are special are both what I hoped for and expected and also in ways, I could not have imagined. 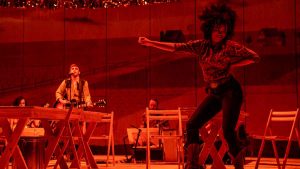 Have you been to Philadelphia before?

Sasha Hutchings: I was in Philadelphia briefly for Rocky on Broadway and I visited twice before. This will be my longest trip. One of the first shows at the Forest Theater since the pandemic.

Talk about being on the hit CBS show Blue Bloods?

Sasha Hutchings: When I told my mother I was on Blue Bloods she was very excited. It was one of my first guest-starring roles on TV and it was awesome.

Sasha Hutchings: I am inspired by my family and the journey we’ve had. It’s about what it takes for me to be where I am. When it comes to my parents, grandparents, and ancestors, it is a miracle that I exist this way and that I get to travel to do this work that I love and show up for other people. I embody the dreams, efforts, and ambitions and people who wanted more for themselves and their children — from slavery to now.

Have your parents seen you in this show?

Sasha Hutchings: Yes, they saw me on Broadway do Ado Annie and Laurey during matinees. My mom and her 10 friends and family members came to Augusta, Georgia, during this tour. They rented a limo and we had a big family gathering. It’s hard to get a large group of people to New York City, so to be able to have them take a drive and see me perform was extremely fulfilling.

Smash (which ran on NBC 2012-2013) and was produced by Steven Spielberg is one of my favorite shows. Tell me about it?

Sasha Hutchings: I had a great time on Smash. It was my first time dancing on camera and on TV. While I had done my first Broadway show there was such a different rhythm. I was in Season 2 and I devoured Season 1. We had a great choreographer named Josh, who would come up with different numbers every week for the auditions in the show. I loved the camera angles and all the new numbers. There were all of these different elements that I found thrilling. 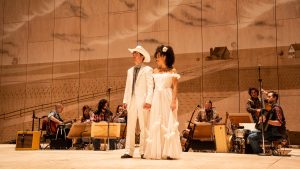 Talk about your experience with Hamilton.

Sasha Hutchings: I fought took and nail to get that audition. When I heard the music in a reading, I knew I wanted to be there. I wanted to move to it and be a part of it. I joined during the development of the show, continued with the Off-Broadway run, and then when it transferred to Broadway. These are the most brilliant artists and actors I have ever worked with. I also filmed the movie with most of the original cast. We filmed for three days and I remember fondly every moment. It is a gift in the form of a wonderful movie. Plus, anytime your mom can watch me and point me out to someone else is special. I watched it with my parents when it first came out. My parents were on this journey from the beginning and when we watched my dad said, ‘I forgot how good this was.’

Why should my readers see Oklahoma!?

Sasha Hutchings: It is a great time to see the theater in general since we are ramping up from an unprecedented pandemic and shut down. The performers you see at stages across the country and their energy is unmatched. It is the right time to see a live performance at a theater, church, or another venue. This show in particular is a piece of our culture and does an honest job to pull in current themes and scope of this narrative to include everyone in your life. It’s much more than asking ‘why do I want to want to watch a show about a bunch of cowboys?’ People will see themselves on stage. I don’t think there has ever been a time to see theater like this or production like this.

For tickets and more information go to, https://www.forrest-theatre.com/oklahoma.html

The post Oklahoma! Star Sasha Hutchings Urges Us To Realize, ‘It is a Great Time For Us to See Live Theater!’ appeared first on Pop Culture Press, part of the Pop Culture Madness Network.