Those Who Walk Away- A Horror Movie for Modern Struggles 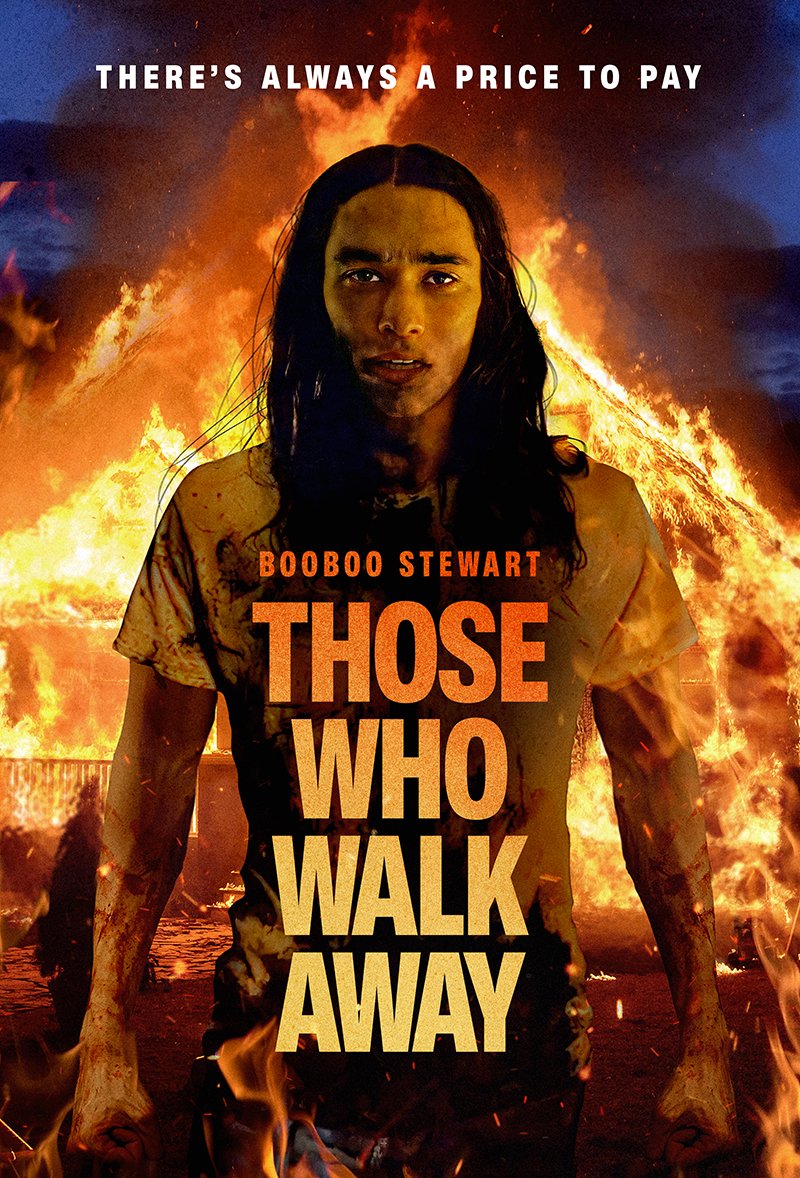 Director Robert Rippberger’s new film Those Who Walk Away teaches audiences about trauma, pain, and how the connections we make with each other help or hurt us. Disney’s Descendants star Booboo Stewart plays Max, a young man dealing with fierce emotions and a difficult past. He meets Avery (Scarlett Sperduto) on a dating app and after spending time together and sharing their experiences Avery leads him to a haunted house where Max has to confront his darkest challenge yet. The film’s intense themes explore what it means to “walk away” and how it connects the increasingly confusing and unstable circumstances we find ourselves in. As a drama/horror the film utilizes its setting and characters to tell a story that everyone can relate to in one way or another and conveys this all through one continuous shot. Robert and Booboo tell us what to expect from the film and what audiences can gain from watching these characters unravel under the fears that possess them.

Q. The film is completed in almost a full shot. How was the cinematography experimented with? Especially during the climax.

A.  Robert: It’s certainly a big challenge making a film in one continuous shot and part of the exception of wanting to do it in the first place is there are some really exceptional other films out there that have done something similar whether it’s Hitchcock’s Rope or 1917 or Birdman. There’s so many challenges because you have to hide everybody in your scene when you do a 360. The level of commitment required from the actors is just through the roof. As an actor, it’s vulnerable enough to be in a movie let alone knowing that you’re gonna be in a scene for 15 continuous minutes and then we’re gonna do the next one. It was a lot of rehearsal and finding the right people that we trusted to pull this off and fortunately we were able to. There were moments where we all wondered whether or not we would actually make it.

Q. What inspired the messages and themes in this film? How did you best tell this through a horror film?

A. Robert: The film is essentially about what it is to experience trauma and cope with trauma and sort of occupy the headspace of that and also to seek solace in other people that maybe experienced something similar. [It’s about] the connection that can be forged or the explosion that can be forged between those two people. Certainly, the lead-up to that is [the main characters] coming together. Once the film progresses Max experiences what it’s like to be rotted from the outside in and what it’s like to navigate that and get out in some way or another.

Q. This was a very unique film, especially for the horror genre. Do you wish to see more horror movies like this in the future?

A. Booboo: Oh gosh, well this one was really hard. Yeah definitely though [laughs]. I’m always up for a challenge. We had such a crazy experience making this movie, working with each other for the first time. It was so intense I would love to make another film like this but how can we make it different? I don’t know if there’s another realm to a one-take film that’s even more absurd [laughs].

Robert: I think an action film would do it.

Q. The two acts of the film are very different from each other and again take place throughout one night conveyed by a long shot. Tell me about how you switched gears from playing a romantic character to a character in a horror film?

A. Booboo: I mean it’s really just the same person going through it essentially. I never really broke them down into two [different people]. It was just finding out what was happening to this person and also finding out about this other person. I will say that it was such a challenge when I found out this was a horror film. I always give major props to actors who act in horror films. I think it’s so difficult to be afraid of something that isn’t real. It was just intimidating for me for that part of the film but working with Rob we really dove into the psychological aspects of what was happening with this character and what he was going through and the projections of that.

Robert: Yeah as a storyteller it’s super important to sort of know where expectations are drawn so that was why very early on we started with strong music that created the tone. What we were really aiming for was kind of little breadcrumbs of where this is going. We were navigating what it means to forgive or to not.

Booboo: The process of making this movie was so much fun we were constantly discovering new things, new elements like oh this means this. If we made this film with no prep it would’ve been a complete disaster [laughs]. Every little bit was so technical and detailed we knew exactly what was happening but there was also so much room for discovery and letting new ideas unfold. I think that’s what I really learned from this film, that you can’t really fit the same puzzle piece into the wrong spot and you have to be ready for anything.

Q. How is this role different from other roles you’ve tackled in the past?

A. Booboo: I definitely learned how to be freer with ideas. I mean just the preparation alone was so intense. Before I start a film in general I usually memorize everything but we shot this in big chunks. Literally some scenes we’d be in one part of town walking across that town, getting in the car, and driving to another town and they kept continuing the scene. So much of the film was psychological and so absurd and not what we experience day to day that a lot of it for me was getting in touch with certain feelings. I learned to put myself in a feeling and let it play out whether it was listening to scary sounds I could find or in rehearsal by myself in my apartment I would just do the craziest stuff just to get myself to feel a certain way. My script is filled with a thousand notes and crossed out notes and more notes but at the end of the day, you just forget about it and let the feeling resonate in your body for each scene. I think that’s something I do. After I practice a scene I just stand there and feel what it feels like.

Q. The cast of this film is very small so I imagine you all got very close. What was it like working with them? Any fun stories from the set?

A. Robert: So because of the pandemic we all stayed in one hotel. We kind of quarantined as a group. We really were around each other all the time and on top of that you’re just so hungry to see are we doing it? Like is this happening? I remember when the hard drives would come back I would wait outside of the hotel in the parking lot for them to arrive and then I would grab them and immediately run up and take them to the editor and start watching what we had. By like day 3 or 4 everybody was in the hotel room. It was our day off but it was just a signal of dedication and showed how everyone was in love with the process and what we were able to do. It was really a lot of fun.

Q. Only a few settings are utilized throughout the film. Which set was your favorite?

A. Robert: I would say the house at the end. I think being outside of the haunted house was my favorite by far.

Booboo: There are so many great things. The bedroom upstairs when we were shooting it I thought it looked great but then when I saw the film I was like whoa this looks amazing. Some things look different when you’re there vs on screen. I think that watching the movie if you look at the bedroom you’re like why are there crazy shadows and lines on the wall? When we got there and we were rehearsing everyone was panting and taping and I was like alright here we go [laughs]. I don’t know how this is gonna work but I love it and it’s crazy and different. Watching it in the context of the film, it’s so interesting the way the bed is and how the windows are all boarded up. I love how the light spills out of the windows. That’s one of my favorite little shots. The whole bedroom sequence there was tons of blocking and staging and there were so many things to be aware of. There were so many things I had to think through then I had to do this scene with this child who was killing it and I’m trying to be on his level [laughs]. There were so many ways Rob and I approached the scene in rehearsal that even when we got on set it was still kind of up in the air. I just loved that room there’s the drawings, the closet, the bed there was so much.

Q. The last scene is very polarizing and honestly almost cathartic. What was it like shooting that scene?

A. Robert: The very end was interesting. It took a little bit to get it going but I think it gave us additional time to work out exactly what we wanted that end scene to be. We actually didn’t choose the final ending until like 10 minutes before shooting. There were multiple endings we were looking at and exploring and it just felt extremely intense but it’s interesting how you used the word cathartic cause that’s how it felt for [us] as well.

Booboo: Yeah there was so much that we had done to get there. I remember before the scene I had to step away. As an actor, it’s nice how you feel so comfortable on set with the people you’re working with that if you need time to be by yourself they’re not like oh what’s he doing over there. We were all there to make this intense art piece and everyone had the utmost respect for everyone. I remember for that scene in particular I was kind of standing around and then I was like ok I need to go. I remember going behind a bush and just sitting there and waiting for everything to be ready. There was a lot in those moments beforehand that was shared with Rob and I.

Robert: We also had quite an audience at the end. We had a very sizable number of people from the town and everyone was so respectful they were gathering on the other side of the street which was kind of conflicting with Booboo’s eye line. It’s very important that you create a zone of silence and concentration around the actors so we asked them to move and we tried to give them a little viewing area to watch it. Right up until delivering the film people were pushing different directions like change this, change that. I think the ultimate ending to our ending is how it’s received.

You can watch Those Who Walk Away on any of the platforms here:

The post Those Who Walk Away- A Horror Movie for Modern Struggles appeared first on Pop Culture Press, part of the Pop Culture Madness Network.