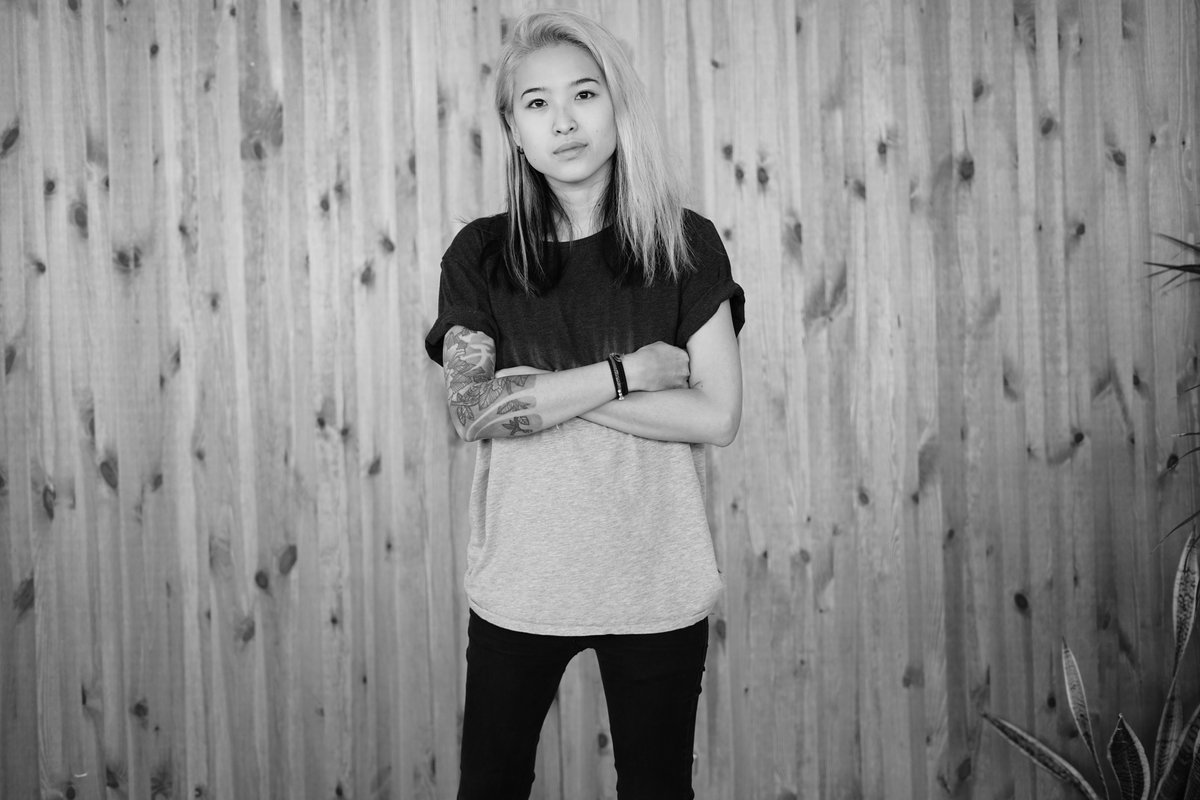 Hailing from Singapore, LA based pop rock artist and front runner of Paper Citizen Claire Gohst(she/they) has always kept her head up even in the darkest of times. After having to leave home at 17 for coming out as queer to her parents, Claire quickly traveled to the states to discover their love of music and create a sense of community. As an upcoming POC queer artist, Claire shares her story of where she came from and where she’s meant to go in her musical journey.

Q. What is your story with music? How has music helped you throughout your life?

A. I grew up in a very religious family. I didn’t know how religious it was at the time. They placed a lot of emphasis on church and academics so I started classical music and played violin and piano when I was a little kid. When I eventually became a teenager I realized I was queer and my parents didn’t like that a lot. I ended up having to leave home at 17 and pretty much dropped out of school. I found community in musicians who played at bars and clubs and I found myself playing music and really enjoying it. I was playing a lot of American covers for American tours. I’d play for locals and tourists at multiple bars and clubs. It was mainly song requests, some original songs but mainly top 40 hits. Music pretty much saved my life. I reevaluated everything I knew, my whole worth, my identity and I found that music was a safe space to express my energy.

Q. What made you want to pursue a more alt pop rock sound in a business where rock is dying and pop and rap are encouraged.

A. That’s interesting, I feel like they’re pockets. Like what’s mainstream right now is who has the money, who has the funding to put what’s on the radio right now. I feel like rock is not dead. I feel like people wanna hear rock they’re craving it. A part of it has to do with computers and less people being able to get together and rock out all the time. If you’re making tracks or producing you can do that by yourself on your computer. But I do love rock. I listen to a lot of rock.

Q. “Heart On Fire” is a very layered song lyrically and musically. Describe the process of making this work of art.

A. This actually started as an experiment on my computer. Traditionally I’ll start with guitar or piano and I’ll start there but I’ve been trying to challenge myself to work in a more modern workflow. I want to create something entirely on the computer. But I was kind of lost. I didn’t even know where to start. I had to learn to kind of pause and take a step back and sit there and process like what am I thinking what am I feeling as opposed to you know sometimes you grab an instrument and you kind of start noodling and see where it takes you. This was kind of ok, what am I feeling and how do I want to portray that. I started to think of some harmonies that I used to listen to in songs from the 90s grunge era. I would start singing these melodies with bands that I’d worked with through the years. I had to hear it in my head and then program it all out on the computer. Then I brought it to a band and the more we played it the more it came together. It was really an experiment and a combination of things that influenced me. I wanted it to be nostalgic and modern at the same time. Lyrically I wanted it to be a little bit political. I’m originally from Singapore and I love all the people and my friends there but the government can be pretty restrictive. It kind of gave me that sinister feeling like a big bro watching you like an evil sentiment but underneath that there’s a lot of love and care. There’s a lot of community from where I’m from. There’s a lot of sharing of breaking down those barriers and their system or society has put between us. Lyrically that’s what I was trying to portray.

Q. Talk about how Covid-19 has affected your ability to tour and connect with fans especially as someone who is so immersed in the music scene.

A. Well I think for most of us Covid killed all of the gigs for two years straight. Especially as an indie artist, we got hit the hardest so that was tough. A lot of us, I feel like we went back to the drawing board. We were writing a lot of songs and finding new ways to create these productions. We were finding ways to talk on zoom and collaborate. A lot of it was just observing what we’ve already done and trying to improve on that as opposed to the outreach that we used to have. I did do a couple of streaming shows. It’s cool but it’s not the same. Even as an artist you know there’s people typing in the chat but you have to read it and respond to a quiet room. It’s a bit different. I think we got creative in looking for other means of work. Studio work, workshops, teaching, production I think we all just went online.

Q. You’ve been on your own pursuing music since you were 17. What were some things you wish you knew then? How have you grown as an artist?

A. I feel like everything happens for a reason but if I could go back and say something it would be that I wish I was easier and kinder to myself. For many reasons, I was really upset and angry at the time. I think that that’s a lot of the emotional delivery for a music and a lot of the drive but I wasn’t taking great care of myself. I wish I had a little more compassion for my little human here. I feel like I’ve grown a lot musically, spiritually, and I’ve learned to let go of these expectations that I have. Especially when you’re transitioning from teenager to adulthood. Everyone is telling you what you should be doing and what’s the right path and some of it, you cling onto it so tight that you realize the only person you’re not serving is yourself. I wish that I just let it be but it’s so much easier said than done. I try to practice that every day.

Describe your experience as an LGBTQ+ and POC singer.

I feel like the climate for POC, queer, people in any kind of industry was a little different 10 years ago. In the decade things have changed so much. Back then, I felt like there were a lot of people that would make comments about things that you didn’t really wanna hear. Like you know it’s just a phase or this is not gonna work or people don’t like that. Over the years though I think I’ve learned to just love those different parts of myself. Maybe I don’t understand the privilege differences but I started to see that when I moved to America. The amount of interactions and the way people talk to you and open up to you. It feels very different when you’re a majority than when you’re a minority. I do like that I’m somebody who can relate to someone who looks like me or identifies like me and sees me and is able to realize that they’re are artists out there that are like them. I think it’s shaped the way I’ve written music and really has shaped my perspective on what it means to be a minority in another country. Learning the different ways of western culture has been very eye-opening for me.

Q.What are some of your favorite genres? Inspirations?

A. Oh pop rock! I love pop rock. I love jazz. I have a long history of classical influence. A lot of American styles. Lately I’ve been getting into the blues. I’m a little late on the game for that but I feel like it’s a resurgence and I’m in the mood for the blues now. It’s emo but sultry. I feel like that’s what the blues is but definitely a lot of rock. A lot of alternative rock and pop music especially here in LA there’s a lot of candy pop. I’m listening to Donna Missal. She’s amazing. Of course I love Hayley Williams. Lately I’ve been getting into Fletcher who is super duper pop. Then I have Ariana Grande and Doja Cat. Those are kind of my guilty pleasures (laughs). I love these super powerful front women. Of course I want to shout out local artists too. Sometimes the people who inspire you are the people who are around you and sometimes you just have to work with what you have. I feel like a lot of my inspirations are from the musicians I played with.

Q. What advice do you have for young aspiring musicians, especially ones that are facing similar situations that you did?

A. Write them songs! Go see your local musicians. Find a community! I know it’s hard in the pandmeic but its possible you just have to find those little pockets of queer artist and BIPOC singer/songwriters. Whatever genre it is there’s always going to be a small niche community of people who showcase their songs. You know open mic is a great example to get your song out there, see how people respond. Even if you’re too shy, look at other artists who are trying to start out. It’ll always give you inspiration. Sometimes looking at someone like Hayley Williams when you’re trying to start out might be overwhelming like damn how am I gonna be like her but she also started somewhere she worked her butt off. Just take it day by day and be kind to yourself and your music. I remember when I started out I was like ugh this sucks but it’s a process.