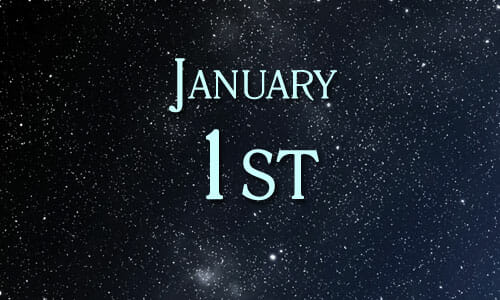 46 BC – The Julian Calendar began, and was used widespread until 1582.

1751 – The British Calendar Act of 1751 made January 1st the start of a New Year in English-speaking countries. Prior to that, it was on March 25, ~ The Vernal Equinox.

1818 – Mary Shelley’s novel Frankenstein, or The Modern Prometheus was published (anonymously) in London. (500 copies were made)

1910 – The Hydrox “biscuit bonbon,” a chocolate sandwich cookie with creme filling, was introduced. Oreos came out in 1912.

1915 – Aspirin was made available for the first time in tablet form. The pills were manufactured by Bayer pharmaceuticals, and had been available in powder form before that.

1936 – The Herald Tribune of New York began microfilming the latest issues, becoming the first US newspaper to make a current record of its publication.

1946 – ENIAC, the first U.S. computer was completed. It was built at the Moore School of Engineering, University of Pennsylvania, Philadelphia,

1948 – The first motion picture ‘newsreel’ in color was taken at the Tournament of Roses and the Rose Bowl Game, Pasadena, California.

1962 – The Rose Bowl game on NBC was the first coast-to-coast color television broadcast of a college football game in the US.

1979 – The Grateful Dead played the final concert at the iconic Winterland venue in San Francisco on New Years Eve 1978 which lasted over 8 hours. The guests were treated to a hot buffet breakfast at dawn when the show ended.

1985 – VH1 debuted on US cable
1985 – The AT&T monopoly was broken up into seven companies: Ameritech, Bell Atlantic, BellSouth, NYNEX, Pacific Telesis, Southwestern Bell and US West.

1995- The History Channel was launched

1995 – The last syndicated Far Side by cartoonist Gary Larson appeared. (started in 1985)

1997 – U.S. television networks adopted a ratings system for programming similar to the one used for motion pictures.

1999- The Biography channel and DIY channels were introduced.

2008 – CourtTV was rebranded as TruTV

2014 -The manufacture and importing of the common 40-watt and 60-watt general service incandescent lamps was ended under the deadline set by the Energy Independence and Security Act of 2007.