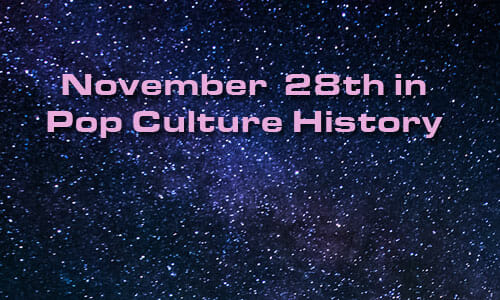 2348 BC – A supposed comet , under divine guidance, passed near Earth, causing the Great Flood, in the opinion of Anglican priest and mathematician, William Whiston. They did not know much about comets in 1696.

1717 – Blackbeard attacked a French merchant vessel called La Concorde, which he captured and renamed as the Queen Anne’s Revenge.”

1925 – The Grand Ole Opry made its (weekly) radio debut on station WSM, in Nashville, Tennessee..

1907 – In Haverhill, Massachusetts, scrap-metal dealer Louis B. Mayer opened his first movie theater, The Orpheum. It was a renovated 600 seat burlesque house.

1922 – The first skywriting in the US was demonstrated over Times Square, New York City, by Capt. Cyril Turner of the Royal Air Force. Flying at 10,000 feet, he wrote letters in white smoke a half-mile high: Hello, U.S.A. Call Vanderbilt 7200. It was an advertisement for the American Tobacco Company.

1942 – Cocoanut Grove Nightclub Fire, Boston Massachusetts. Nearly 500 people were killed in the blaze. This fire was probably the single biggest reason ‘EXIT’ signs are now in (US) public places.

1967 – The first pulsar known as PSR B1919+21, in the constellation of Vulpecula, was discovered by Jocelyn Bell Burnell and Antony Hewish.

1975 – As the World Turns and The Edge of Night aired their last ‘live’ episodes, switching to pre-recorded programs.

1984 – William Penn and his wife Hannah Callowhill Penn were made Honorary Citizens of the United States.

1994 – Serial killer Jeffrey Dahmer died of injuries received after he was attacked by other prisoners while cleaning a prison toilet. Or maybe one other prisoner. ‘Nobody saw nothin’, it was reported.

1995 – President Bill Clinton ended the federal 55 mph speed limit that began in 1974, as an energy-saving measure.

1997 – The last episode of Beavis and Butt-Head aired on MTV. The series was later resumed again briefly in 2011.

2001 – Enron Corporation, once the world’s largest energy trader, covering major electricity, natural gas, communications, pulp and paper, and with over 20,000 employees, essentially went out of business.