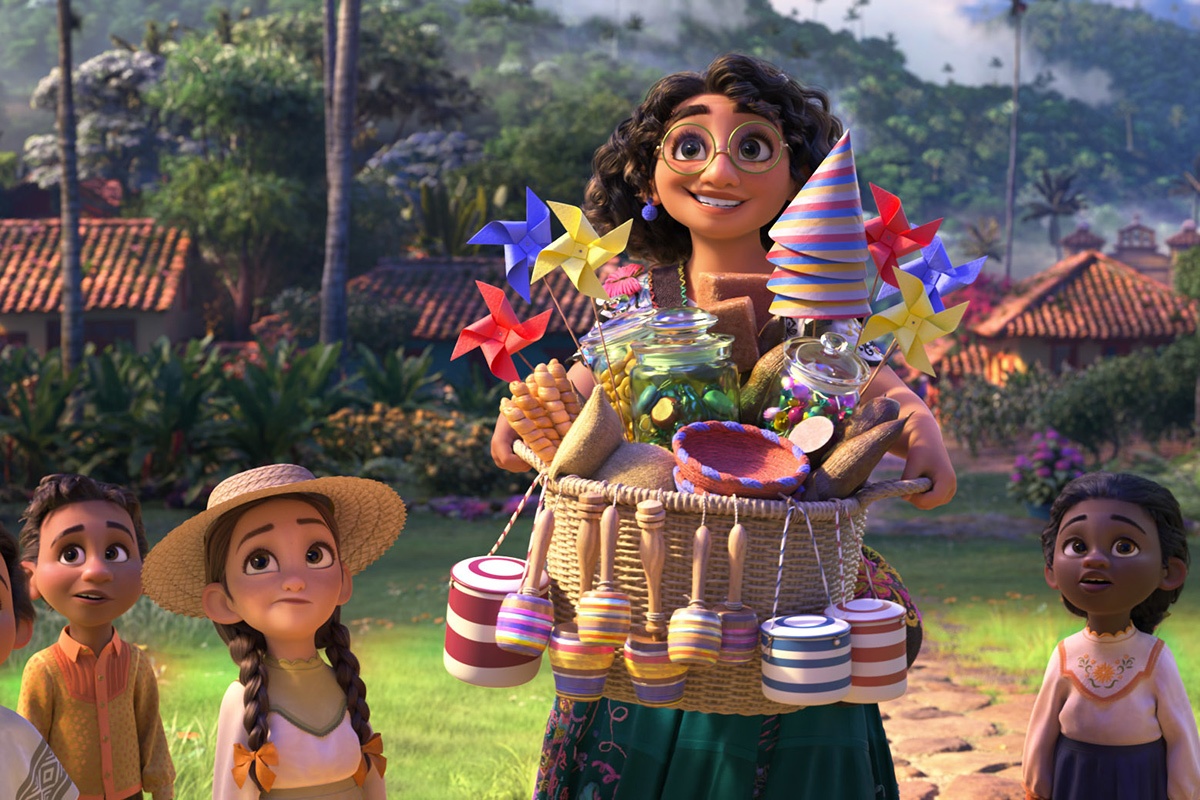 Just in time for Thanksgiving comes Walt Disney Animated Studios’ 60th film Encanto. Transporting the audience to Colombia, the film follows the story of Mirabel Madrigal and her extraordinary family who were blessed with a lively house and magical gifts…well except for Mirabel.

The film’s premise is like other Disney films we’ve seen-essentially a protagonist striving to find their purpose in the world but Encanto differs in its large cast of colorful characters which aids in film in some areas but depletes it in others. Allowing for some characters to receive full-length musical numbers while others are only limited to short solos and bits of dialogue that leave the audience wanting more to establish a connection.

Mirabel is an astounding protagonist with her natural ability to solve problems creatively and open her heart to those who’ve been ignored. Her design is also something to behold in the eyes of Disney, being the first female central protagonist to wear glasses in a Disney animated film.

The film being a musical composed partly by modern Broadway legend Lin-Manuel Miranda blends traditional Colombian music with signature musical structure. The songs are hit or miss but when they hit they’re reminiscent of Disney’s renaissance era numbers. “The Family Madrigal” is a joyous, upbeat opening number while “We Don’t Talk About Bruno” serves masterfully crafted as a subversive take on the villain song.

Performances range from decent to phenomenal with Stephanie Beatriz providing the speaking voice and vocals for Mirabel along with Jessica Darrow and Diane Guererro who play her sisters. Their songs dig deeper into the character’s personalities that tie in perfectly with the film’s themes about family pressures and how they affect those inflicted by unrealistic expectations.

Aside from the soundtrack and vibrant characters, Encanto struggles with plot inconsistencies, extensive character development and a lack of the traditional Disney adventure. It’s great to see the House of Mouse take a step outside of the box but the majority of the film’s marketing emphasized journeying to new places and discovering different perspectives to fix broken bonds. While the latter is absolutely implemented into the film, the execution is weakened by a rushed ending that circles back to the same cliche themes Disney has already explored in previous films.

Encanto seems to be another smash hit for Disney however, receiving a near symmetrical high score from both critics and audience members on Rotten Tomatoes. Popular film reviewers on Youtube and Letterboxd have also given the film immense praise for it’s an exploration of family dynamics and representation of Colombian culture.

Depending on how well Encanto continues to do at the box office coupled with merchandise sales might even lead to Mirabel Madrigal becoming the first Hispanic Disney princess. A title coveted by all Disney leading ladies but is only reserved for films that fit certain requirements (financial success is the main component).

Families across the globe will certainly enjoy Encanto and all this magical tale has to offer, more cynical and observant viewers however will be quick to notice the film’s flaws and missteps. Though even the most scrutinizing audiences might be swept up in this enchanting atmosphere and find themselves moving in their seats along to the soundtrack.