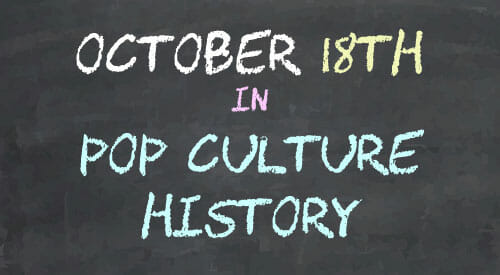 October 18 in Pop Culture History
1386 – The University of Heidelberg opened.

1851 – Herman Melville’s Moby-Dick was first published as ‘The Whale.’

1867 – “Seward’s Folly” United States took possession of Alaska after purchasing it from Russia for $7.2 million.

1898 – The United States took possession of Puerto Rico from Spain.

1964 – Jackie Mason appeared on The Ed Sullivan Show and may have given Ed “the finger” on the air. He never appeared on the show again.

1968 – The US Olympic Committee suspended Tommie Smith and John Carlos for giving a “Black Power” salute during a victory ceremony at the Mexico City games.