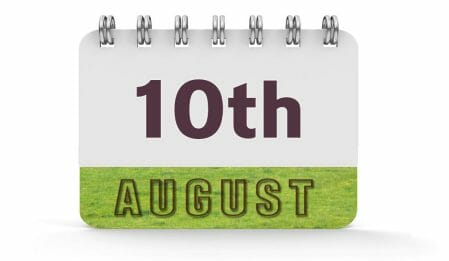 1675 – The foundation stone of the Royal Greenwich Observatory in London, England was laid.

1846 – The Smithsonian Institution was chartered by the United States Congress.

1932 – An 11 pound chondrite-type meteorite broke into several pieces and landed near the town of Archie in Cass County, Missouri.

1941 – The Mount Rushmore memorial was dedicated.

1948 – Candid Camera made its television debut, after being on radio for a year as Candid Microphone.

1966 – The US Treasury Department discontinued printing the $2 bill due to lack of demand.

1971 – The Society for American Baseball Research is founded in Cooperstown, New York.

1977 – In Yonkers, New York, 24-year-old postal employee David Berkowitz (the “Son of Sam”) was arrested for a series of killings in the New York City.

1995 In the aftermath of the Oklahoma City bombing, Timothy McVeigh and Terry Nichols were indicted for the bombing. Michael Fortier pled guilty in a plea bargain for his testimony.