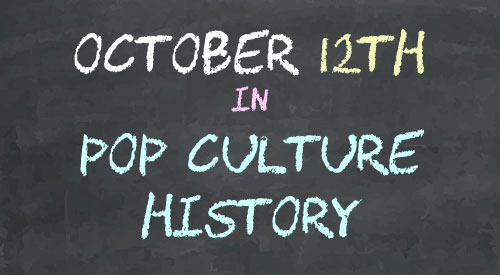 October 12 in Pop Culture History
National Farmers Day.
Old Farmer’s Day is now actually known as National Farmers Day. Though the exact date and history of this day is not known, it is known that the holiday was originally celebrated in the 1800’s. This day is a day to remember and honor the hard work done by farmers throughout our country as well as our country’s history. We see our food, mostly, in the stores packaged and ready to cook and eat and not many of us know the hard work that goes into raising fruit vegetables and livestock. This is a day to remember the tremendous work our farmers do for us.

1792 – First celebration of Columbus Day in the US was held in New York City.

1810 – Oktoberfest begins: In Germany, the Bavarian royal family invited the citizens of Munich to join the celebration of the marriage of Crown Prince Ludwig of Bavaria to Princess Therese von Sachsen-Hildburghausen.

1950 – The George Burns and Gracie Allen Show debuted on CBS.

1964 – The USSR launched Voskhod 1 into Earth orbit as the first spacecraft with a multi-person crew; it was the first flight without space suits.

1994 – NASA lost radio contact with the Magellan spacecraft as it descended into the thick, acidic atmosphere of Venus.

2000 – The USS Cole was badly damaged in Aden, Yemen, by two suicide bombers, killing 17 crew members and wounding at least 39.

12 Days Of Christmas: A Look At 12 Banned Indoor Toys!