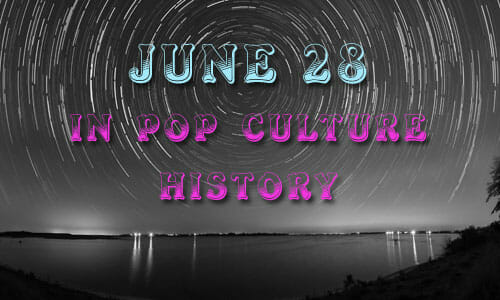 1832 – The first American case of a cholera epidemic was reported in New York City.

1838 – Coronation of Queen Victoria of the United Kingdom.

1895 – The US Court of Private Land Claims rules James Reavis’ claim to Barony of Arizona is “wholly fictitious and fraudulent.”

1914 – World War One (orginally ‘The Great War’) began with the assassination of Austrian Archduke Franz Ferdinand, in Serajevo.

1926 – Mercedes-Benz was formed by Gottlieb Daimler and Karl Benz merging their two companies.

1985 – St. Elmo’s Fire and Pale Rider were rekleased in theaters

1996 – The Nutty Professor and Striptease were released in theaters

1997 – Mike Tyson bit Evander Holyfield’s ear in the third round of their heavyweight rematch, earning a disqualification.

2000 – The Patriot debuted in theaters

2002 – Hey Arnold! The Movie and Mr. Deeds were released in theaters