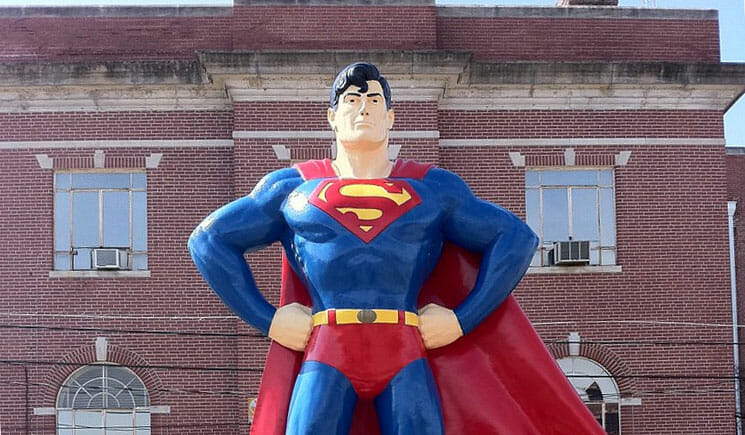 Superman Day was founded by DC Entertainment.  The company started the day in order to honor their most iconic character.  It is said that there are three characters every child on earth knows, Sherlock Holmes, Mickey Mouse and Superman.  Superman Day was established as a yearly event by DC on June 12, 2013 two days before the release of the feature film Man of Steel in which Henry Cavell played the part of Superman.

How to best celebrate the day is totally subjective.  You could watch Superman movies or TV shows.  Read comic books, graphic novels or novels in prose that are based on the hero whose never ending quest for truth justice and the American way still goes on.  You could listen to the original radio program, listen to the music that has been produced in honor of the man of tomorrow or go see a stage production of IT’S A BIRD, IT’S A PLANE, IT’S SUPERMAN! The musical based on the comic hero.  Superman has made his mark on every form of entertainment.There are other ways as well. 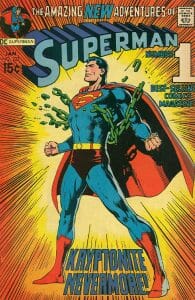 Superman is a hero not just because of his powers but for his fight for justice and for his concern for those less fortunate.  Superman Day could be used for feeding the hungry, volunteering in a nursing home, visiting the sick, or beginning to take part in ways to establish social justice.  Being kind to your neighbor is very good way to celebrate a hero who would just easily get a cat out of a tree as save the planet form Lex Luthor or Brainiac.

Interestingly Superman Day was celebrated once before on July 3 1940 at The New York World’s fair.  This day was set to promote a comic book that would be sold exclusively at The World’s Fair.  It was NEW YORK WORLD’S FAIR COMIC a 100 page special edition.  An appearance was made at the Fair by Superman himself.  He was portrayed by Ray Middleton and it is Middleton who is given credit as the first actor to portray Superman.  Middleton’s credits are mostly stage he had featured roles in both ANNIE GET YOUR GUN starring Ethel Merman and SOUTH PACIFIC starring Mary Martin both on Broadway.  This was also the first time an official Superman costume was ever used.

If celebrating the day on your own isn’t your style you might consider taking a trip to Metropolis Illinois where the during the second weekend in June a Superman Festival has been held for over forty years.

Metropolis is a small town of about 6500 people but every year the population swells as the city celebrates its favorite son.  Metropolis, as everyone knows, is the city where Superman and Clark Kent made their home long ago.  Metropolis itself was founded in Illinois over 100 years ago.  In 1977 Metropolis held it’s first Superman Festival.  At the time it was hoped that a Superman theme park would be built in the area but that dream as of yet has not happened.

At the center of the festival is Superman Square where you will find a giant Statue of The Man of Steel as well as The Superman Museum. 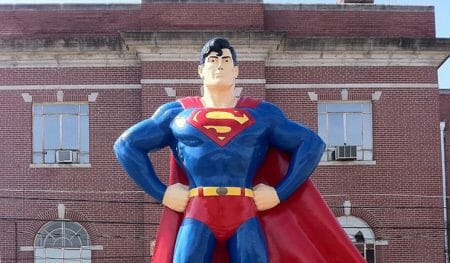 The Superman Museum opened its doors in 1993.  It was established by Jim Hambrick who has been collecting Superman for sixty years.  According to the museum literature, it houses over 70,000 items including virtually every Superman Toy ever produced and the only remaining costume worn by George Reeves in the original Superman TV show.  Mr. Hambrick started collecting Superman at the age of 5 with a Superman Lunch Pail, an item he still has and can be seen in the museum.

I was able to speak to Jim’s daughter Jessie Jane Hambrick about the festivities for The Superman Festival.  The festival includes a carnival, A Super Car Show and Road Race as well as a Super bike Ride.  There is musical entertainment as well as cosplay with people coming dressed as their favorite heroes.  One wonders if Spiderman dares to show his face here?  Celebrities make appearances here too.  Different actors and actresses from Superman’s and DC Comics’ long history on both the big and small screens have made their way to the festival.  And of course Superman himself attends the festival every year.

Currently The Museum is having a brick sponsorship program.  You can buy a brick which will be engraved and then placed as part of the sidewalk surrounding The Superman Museum.  The money raised is to renovate the second floor of the museum which is currently not usable.  You can be a part of Superman history by participating in this fund raiser.  More information can be found here https://supermuseum.com/sponsorship-brick-info.

Superman Day!  A great day and a wonderful way to bring out the hero in all of us.