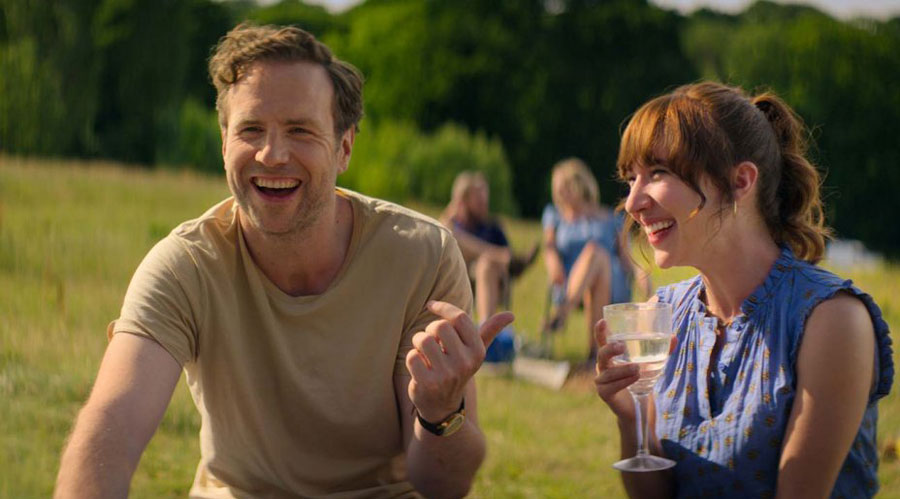 In “Trying,” all Nikki (Esther Smith) and Jason (Rafe Spall) want is a baby—but it’s the one thing they just can’t have. How are they going to fill the next 50 years if they can’t start a family? After ruling out every other option, Nikki and Jason decide to adopt and are confronted by a world of bewildering new challenges. With their dysfunctional friends, screwball family, and chaotic lives, will the adoption panel agree that they’re ready to be parents?

“Trying” is written by Andy Wolton and directed by Jim O’Hanlon (“Catastrophe,” “The Punisher,” ”A Touch Of Cloth”), and is produced by BBC Studios.

We found ourselves immediately engrossed in the lives of Nikki and Jason and continued to root for them throughout all of their trials and tribulations over the course of season one. One of our main complaints with a lot of comedy series is that many of the jokes or comedic moments feel forced, however with “Trying” everything flows together so smoothly. Nothing feels forced and both Nikki and Jason are genuinely likable characters. The dialogue is quick and witty and the comedic moments were placed just right, as to break up some of the more tense scenes.

It was also fantastic to see that the show did not try to sugar coat any of the real emotions that a couple would go through upon learning that they will not be able to conceive a child. The series focuses on a modern love story without being cliche. We learn about Nikki and Jason’s family issues and the way in which their relationship will continue to grow and adapt to their new situation. It was fascinating to watch them grow and change together learning more about each other and facing some hard truths about each of their personalities. The on-screen chemistry between Esther Smith and Rafe Spall is infectious.

“Trying” is both relatable and hilarious and it definitely left us wondering just where Nikki and Jason will end up if we go into season two, as surely there will be even more obstacles for them to overcome.  We had a chance to catch up with actress Esther Smith (Nikki) and Rafe Spall (Jason) to give us a more in-depth look at their characters and the series overall.

When asked about what attracted them to the show, Esther Smith reveals, “I felt like I related to it so much just from reading it. I read the first episode in a coffee shop, I had like 20 minutes and I just inhaled it. And it made me laugh, I sat at the end reading it, I was crying, embarrassingly in my coffee. And I just recognized the certain hurdles that being in your early 30s and having, you know, friends around you kind of seemingly very settled with adult life, and feeling like why am I not there yet or should I be there? What do I want in my life? I really recognized that and that’s what drew me to the project. And I just also wanted to be in the company of these two characters. I think their relationship is so well written and that was what really attracted me to it.”

Rafe Spall adds, “I concur. I thought it was both original and familiar, which is a very difficult thing to achieve. It was beautifully and deftly written, as it had comedy and drama and was about a subject I wasn’t familiar with personally, but it had universal themes. And of course, Esther was going to be in it, so it was easy to say yes!” Esther joked “I paid him to say that, you know!”

Speaking about the way in which “Trying” is especially relatable right now, as people are trying to do the best they can at whatever they are working on and the way it connects to their characters, Spall says, “Yeah, I hope so and I think that’s the point of the show. It’s about a couple trying to adopt but I think we all know what it’s like to strive to get to a point in your life where you feel like something’s missing, or to feel like you’re not where you want it to be, perhaps. For the first time in human history, we all collectively sat there thinking about our own lives. So, I think that it is relatable at any time but especially now, because we’re all trying to do the right thing, we’re all trying to be as good as people as we can, and we all want to make a contribution, you know, we all want to put something good out into the universe. And that’s what I’m pleased about this show, is that it’s about people being good to one another. They’re not violent or vindictive or mean, they’re kind, and I think most people are!”

Smith comments, “, I think this is such a specific time where we’re forced to look in on ourselves and see what we can do to be better or to try and be kind.  I feel like it’s, this period of time, for example, has just given me a real opportunity to stop and see exactly what I want with my life and what I want to do when we’re allowed to be with people again, and what I need. I think it’s coming out at a really interesting time, which probably would have meant something different had it come out when we weren’t in this pandemic. We’re all constantly trying as people, we’re all constantly trying to do better, trying to figure ourselves out, trying to figure our lives out, and we’ve been given this mad opportunity right now to try and, yeah, come together as people, as a community, and maybe leave this mad situation we’re in, in a different headspace into a different world.”

During the course of season one Nikkie and Jason are truly put through the wringer as a couple, but by the end of the season seem to come out stronger than ever. When asked going into season two about the direction for Nikki and Jason and the other tests they will have to face, Spalls tells us, “The first season was about them being approved. And then, the second season, I imagine, you know, we’ve not read anything yet, it’s going to be about them being matched with the child which is probably as difficult a process as the first one and there are lots of dramatic and comedic situations that will arise out of that, for sure. But, from a selfish point of view, I just can’t wait to do this show again because making the first show was creatively one of my favorite ever experiences.  I loved making this show. I loved hanging out with Esther and the makers of the show. It was pure joy. It was literally what I got into this for. So, really, whatever happens, as long as I get to hang out with these people and make a show we all believe in, that’s all I care about, really. ”

Smith says, “There’s so much scope, there are so many options where this could go which I’m really intrigued to see where it goes, I’m really excited to see what happens to them. And I’d quite happily do this for many, many years to come. It was a lovely experience. It was such a joy of a job and I’m really looking forward to yeah, like Rafe said, working on series two.”

One of the major plot points in “Trying” is fertility struggles, when asked if they spoke to anyone that suffered from these issues and understanding their mindset, Spall reveals, “You know, the writer of the show, Andy, he, himself, was adopted, so that’s why it’s dealt with in a sensitive and also light-hearted matter because he’s a comedy writer, he has an amazing sense of humor and he’s able to see the lightness in the darkest of situations but also, was instructed when it came to finding out certain details about it. I also know people in my own life that have gone through adoption, and that stuff is all helpful but only to a certain extent because these are two people that know nothing about the subject they go into, they’re learning about it as they go.  So, that, for me, was an excuse to do very little research.”

Smith adds, “I did a bit of reading beforehand and I found there’s not a lot reading material that I could find about adoption stories, but I found this one particular book about a journalist who had gone through a fertility struggle and then went onto the process of adoption, and I found that a really interesting read just because it informed me on just how long and hard the process is. But similarly, to what Rafe said, everything is kind of in the script already.”

We asked Smith and Spall if there was anything they were surprised to learn about themselves as actors as they continued to delve into their characters. Spall tells us, “I think that it’s a constant sharpening and honing of what it is you do.  And the only way you get better is by acting with people better than you and I had that experience with Esther, and I just wanted to keep up with her. And, you know, what I- what I’m aware of, is from an audience’s point of view, actors on their own aren’t necessarily interesting, it’s an organic thing that they create between the two of them, which is the thing it sustains. That’s the thing that’s organic because two actors can have their own idea of a scene the night before, and then they come in and do it and it becomes something else.  And to attain that, you need a level of openness and trust, and also you need someone else who is very talented. And so, I was always very aware, or the creators were too, that the chemistry between two lead characters was paramount to achieving a world that you wanted to be in as an audience member. So, you’re always learning but it’s just fun. And look, I mean, I wear makeup for a living and wear other people’s clothes and someone does my hair, so if that’s not fun, I don’t know what is!”

Smith reveals, “I was just really aware that I was going into this with a team of creative people, cast and crew of a very specific high caliber. And I mean, that’s kind of gold really, because you can’t help but learn from everybody that you’re working with. And Rafe and I were pretty much in every scene together. And I mean, I definitely got a lot from working with him and it definitely made me raise my game, I think. And I think I’m so thankful to be a part of this project for that reason. It was a joy to go into work every day. And I know that sounds really trite but it’s true.  It’s been one of my favorite jobs.”

Spall says, “I agree, yeah. I think she’s a really fun, original person, with a sort of, very playful sort of naughty sense of humor. And again, she’s a reminder, you know, that it’s supposed to be fun, it has to be fun, you can’t take it too seriously because you are in an extremely privileged position to make-believe for a living. So, she’s a lovely woman, a terrific actress.”