Drug Investigation Leads to Arrest of a Seaford Man-Millsboro

On May 29, 2020, the Delaware State Police Sussex Drug Unit, Sussex Governor’s Task Force (GTF), with assistance of the Millsboro Police Department conducted a drug investigation at the Iron Branch Apartments, located at Parker Circle, Millsboro, resulting in the arrest of Sheldon White.  White who had active warrants out of the Seaford Police Department, Sussex County Family Court and the Justice of the Peace court, was located outside of the apartments.  He was taken into custody without incident and found in possession of the following: 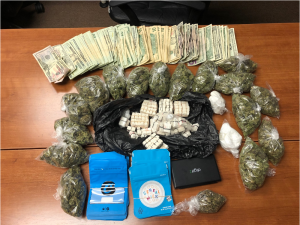 White was transported back to Troop 4 where he was charged with the following:

White was arraigned before the Justice of the Peace Court and committed to the Sussex Correctional Institution on $21500.00 cash only bond.

The post Drug Investigation Leads to Arrest of a Seaford Man-Millsboro appeared first on Delaware State Police - State of Delaware.