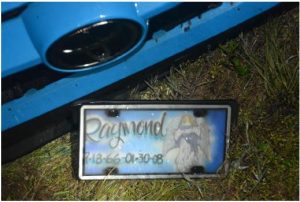 The crash occurred on May 10, 2020, at approximately 11:51 p.m., when a blue Toyota passenger vehicle was traveling northbound on DE-495 in the center lane approximately 1 mile south of Edgemoor Rd. A 2016 Dodge Challenger, operated by a 45-year-old Wilmington man, was also traveling northbound DE-495 in the center lane, rapidly approaching the Toyota. The Dodge Challenger failed to maneuver around the Toyota, and the front bumper of the Dodge Challenger struck the rear bumper of the Toyota, which caused the gas tank of the Toyota to rupture. After impact, the Toyota continued out of control, exited the northbound lanes and down the embankment as it was engulfed in flames. Once the vehicle came to rest, the male operator and only occupant in the vehicle, became entrapped within the burning vehicle. The operator of the Toyota was pronounced deceased at the scene. At this time, very little is known about the operator and the vehicle due to the extensive fire damage.

Following the initial impact, the Dodge Charger continued out of control for over 1,000 feet before the vehicle came to rest in the center lane. The operator was treated at the collision scene for minor injuries.

The crash continues to remain under investigation by the Delaware State Police Troop 2 Collision Reconstruction Unit. If anyone has information relating to the owner of a blue Toyota 4-door passenger vehicle, which displays a vanity tag located in the front of the vehicle with the following information “Raymond 9-18-66 – 01-30-08”, please contact Sgt. D. Alexander at DSP/ Troop 2 (302) 365-8484.

Information may also be provided by calling Delaware crime stoppers at 1-800-TIP-3333 or via the internet at http://www.delaware.crimestoppersweb.com

If you or someone you know is a victim or witness of crime or have lost a loved one to a sudden death and are in need of assistance, the Delaware State Police Victim Services Unit/Delaware Victim Center is available to offer you support and resources 24 hours a day through a toll free hotline 1800 VICTIM-1. (1800 842-8461).  You may also email the unit Director at [email protected]