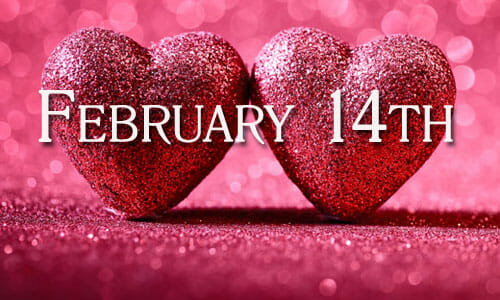 ~270 – Valentine, a priest in Rome in the days of Emperor Claudius II, was beheaded for performing (illegal at the time) marriage ceremonies.

1779 – Captain James Cook, the great English explorer and surveyor in the Royal Navy, was murdered by natives of Hawaii during his third visit to the Pacific island group.

1822 – The patent (#X003456) was issued for the first practical grass mowing machine to Jeremiah Bailey of Chester county, Pennsylvania.

1876 – Both Alexander Graham Bell and Elisha Gray applied for a telephone patent. Alexander’s was later approved.

1912 – Arizona was admitted at the 48th state of the United States.

1929 – Sir Alexander Fleming left a plate of staphylococcus bacteria uncovered, and noticed the mold had killed much of the bacteria. He identified the mold as penicillium notatum, and shortened the name to Penicillin.

1929 – Four men came in, dressed as police at Bugs Moran’s headquarters on North Clark Street in Chicago, killing seven of Bugs’s men in what is called the St. Valentine’s Day Massacre. Moran was a rival of of Al Capone.

1932 – The US team won the first bobsled competition at the Winter Olympic Games at Lake Placid, NY.

1954 – The TV show Letter to Loretta changed its name to The Loretta Young Show. The show premiered on September 20, 1953.

1961 – Element 103, Lawrencium, was first synthesized at the University of California.

2000 – NEAR Shoemaker became the first spacecraft to orbit around an asteroid, 433 Eros

2002 – The final Family Guy episode aired after Fox announced its cancellation. It came back after DVD sales indicated a huge audience for the show.