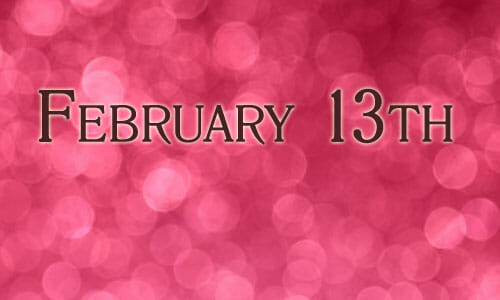 1633 – Galileo Galilei arrived in Rome to face charges of heresy by the Catholic Church for advocating Copernican theory, which held that the Earth revolved around the Sun.

1741 – The first magazine was published in America – The American Magazine.

1895 – Oscar Wilde’s final play, The Importance of Being Earnest, opened at the St. James’ Theatre in London.

1906 -The patent (#812,554) was issued to Alfred Einhorn for his synthesis of procaine, which was given the trade name of Novocain.

1914 -The American Society of Composers, Authors and Publishers (ASCAP ) was established to protect the copyrighted musical compositions of its members.

1946 – The world’s first electronic digital computer, ENIAC (Electronic Numerical Integrator and Calculator) was first demonstrated at the Moore School of Electrical Engineering at the University of Pennsylvania, by John W. Mauchly and J. Presper Eckert.

2004 – Astronomer Travis Metcalfe of the Harvard – Smithsonian Center for Astrophysics believed he discovered the largest diamond in the known universe at the center of the white dwarf star, BPM 37093. Observations claim that the core of the star is a diamond crystal 4000km in diameter.

2029 – Apophis is an asteroid that will pass earth closer than our own satellites orbit on Friday, February 13th, 2029. It will touch our atmosphere, and we will be able to see it wiz overhead. There is a (debatable)  chance of it impacting Earth when it returns in 2036.