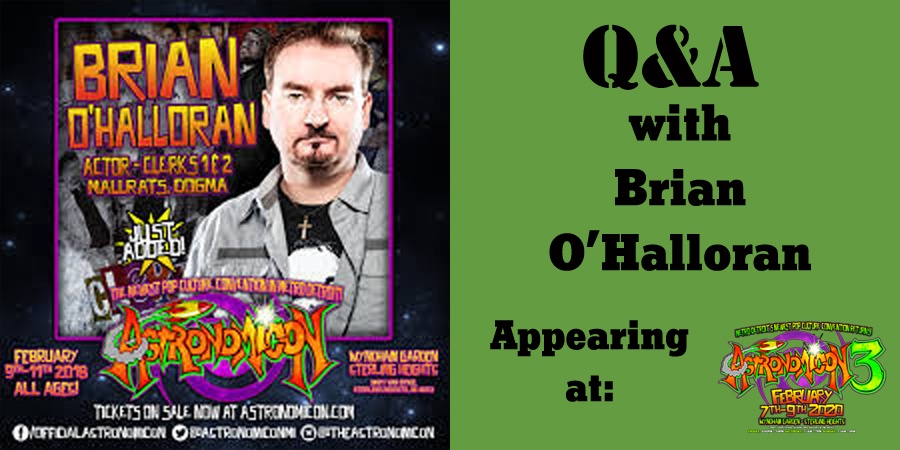 Every fan of Kevin Smith’s early film “Clerks” should certainly be aware of actor Brian O’Halloran who played disgruntled convenience store clerk Dante in the 1994 cult classic. To this very day his signature phrase “I’m not even supposed to be here today!” is without a doubt one of the most infamous film quotes of all time and O’Halloran still enjoys every moment interacting with fans and his View Askew family.

O’Halloran is set to appear, along with his “Clerks” co-star Jeff Anderson at the upcoming Astronomicon convention taking place in Sterling Heights, Michigan curated and founded by rappers Twiztid. This will mark the first time that the pair have appeared at a convention together which certainly has fans buzzing. O’Halloran appeared at the first Astronomicon convention back in 2018. The appearance is also in celebration of “Clerks” 25th anniversary.

We had a chance to catch up with Brian O’Halloran via phone to discuss his upcoming Astronomicon appearance where he spoke to us about his initial expectations when they were first making “Clerks” saying that he had only hoped to “grab hold of a VHS copy of the film to share with family and friends” and like director Kevin Smith he too could not get over the film’s success which really took off after Smith’s larger budget feature “Mallrats”. The film later went on to spawn a sequel and now it appears that “Clerk 3” will soon be in the works, as O’Halloran shares a few details about that upcoming project as well.

O’Halloran is definitely still keeping busy with several other projects currently in the works and due to the on-going popularity of “Clerks” has become a staple within the convention circuit. You can check out our full interview below:

More Astronomicon details can be found below:

From inside the squared circle, Astronomicon 3 has announced the appearance of WWE and Total Divas superstar Alexa Bliss, former pro wrestler and animal activist Amy Dumas (aka Lita), WWE Hall of Fame wrestling legend Brutus “The Barber” Beefcake and WWE superstar The Boogeyman.

As previously announced, Teenage Mutant Ninja Turtles creator Kevin Eastman will make his first Astronomicon appearance at this year’s convention. “I am so excited to get the 2020 convention season started at Astronomicon,” Eastman says. “Team Eastman hopes to see you there! Cowabunga!”

Anthony Michael Hall, the iconic “Brat Pack” actor known for his roles in The Breakfast Club, Weird Science, War Machine and Halloween Kills, has also joined the eclectic roster of guests. Says Hall, “I’m excited and looking forward to coming to Michigan in February. It’s going to be a fun show with lots of great people in attendance. We hope to see you there.”

The all ages event will not only feature appearances, signings and photo ops with many additional activities – including live music performances, Q&A panels, cosplay and tattoo contests, a free play video game room and tournaments, a scavenger hunt and trivia. Confirmed in-costume photo opportunities include CJ Graham dressed as Jason Voorhees, Walter Phelan as Dr. Satan, David Howard Thornton as Art the Clown and Bill Moseley as Chop Top.

The post Clerks Duo Set To Reunite At Astronomicon 3, Exclusive Interview With Brian O’Halloran appeared first on Age of The Nerd.