Dover–  The Delaware State Police concluded a two-day multi-agency operation in the Capital Park neighborhood of Dover due to recent criminal activity.

During the last two weeks of December 2019, there have been a total of four shooting complaints in the Capital Park neighborhood.  The Delaware State Police Troop 3 coordinated a pro-active criminal operation to target violent crime occurring in that neighborhood with the focus on seizing firearms.  Through investigations, it was learned that weapons, drugs and contraband were being hidden at the back of residences, on State and Kent County land.

The operation incorporated a terrain search for contraband while Community Outreach Officers engaged with the community members to inform the residents the reason for the Law Enforcement presence.

During the terrain search portion of operation the following items were located behind residences on South Governor’s Boulevard:

On January 3, 2020 the Delaware State Police received further information that other items were hidden in the woods behind a residence on South Governor’s Boulevard after units departed on January 2, 2020.  Troopers responded back to the area and located 656 baggies of Heroin (approximately 4.59 grams). 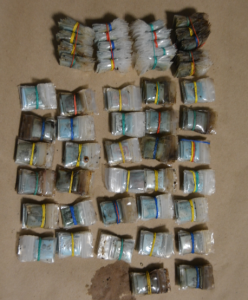 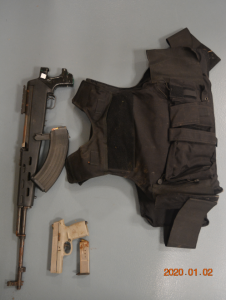 The success of this operation was due to the collaboration and support from all of the assisting Law Enforcement Officers.  We will continue to target these violent crime areas and help our communities make their neighborhoods safer.