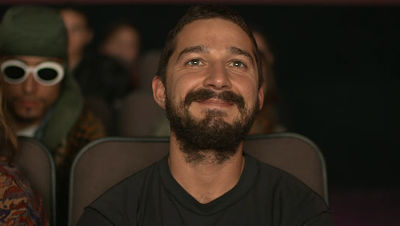 There was a time not too long ago that actor Shia LaBeouf’s antics in public and on movie sets were making more press than the movies he was in. During the 2012 making of the crime drama, “Lawless” rumors swirled around that LaBeouf and Tom Hardy got into a heated argument which led to LaBeouf punching out Hardy. That’s right LaBeouf punched out Bane from that Batman movie.

In 2017 the actor was arrested for drunken intoxication. LaBeouf was ordered to pay some fines, perform 100 hours of community service, get counseling for anger management, and complete drug and alcohol evaluation. It was while in rehab that LaBeouf wrote the screenplay Honey Boy. The screenplay serves as autobiographical.

In the film, LaBeouf plays an alcoholic abusive father to a child actor. Honey Boy director Alma Har’el, told the press that LaBeouf sent him the script while in rehab. LaBeouf won the Breakthrough Screenwriter Award at the Hollywood Film Awards back in November. While receiving the award LaBeouf thanked the officer that arrested him.

The official trailer for Honey Boy is below:

The Peanut Butter Falcon is another film that has been receiving rave reviews. LaBeouf plays Tyler who goes on a road trip with Zak who runs away from his care home to make his dream of becoming a wrestler come true.

The official trailer for The Peanut Butter Falcon is below:

It is great to see a talented person like Shia LaBeouf come full circle and deliver these great performances. What is your favorite Shia LaBeouf film? Comment below.

The post This Year Has Been A Year Of Movies And Reflection For Shia LaBeouf appeared first on Age of The Nerd.