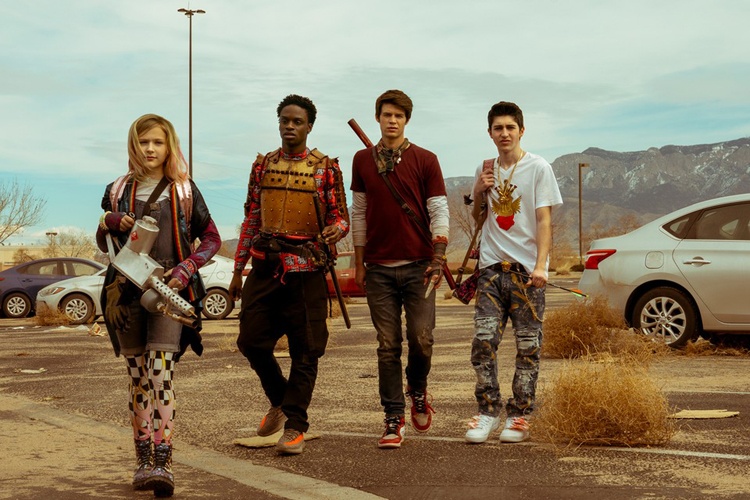 Looking for a show to binge-watch this holiday season? One you might want to consider, Netflix’s teen apocalypse dramedy Daybreak.  Based on Brian Ralph’s graphic novel series of the same name, Daybreak is a genre-bending series that finds high school outcast Josh searching for his missing girlfriend Sam in post-apocalyptic Glendale, California. Joined by misfits, such as 12-year-old Angelica and Josh’s former high school bully, Wesley, now turned pacifist samurai, Josh tries to stay alive amongst the horde of Mad Max-style gangs (evil jocks, cheerleaders turned Amazon warriors), zombie-like creatures called Ghoulies, and everything else this crazy new world throws at him.

One of the many unique aspects of the show worth mentioning, the musical element. Characters have to participate in a singing competition called American Ninja Idol. Think American Idol, but instead of going through to the next round, you get released to Ghoulies for dinner. The man in charge of reimaging songs from Smashing Pumpkins and Air Supply for this on-screen competition, Song Producer Bryce Jacobs.  Below Bryce gives us the inside scoop of his work on the show.

Can you talk about your specific role on Daybreak?

I was Song Producer on the show. Alongside the action and drama, there are these American Idol vs. American Ninja moments where different characters get up on stage and sing for their lives. If they’re good, they live – if not, a trapdoor opens and they have to battle the “ghoulies”. If they escape the ghoulies, then they’re killed anyway. So in this dystopian future, it’s as if one band has survived and the main characters perform with them in this gladiatorial type context where they either get the thumbs up or the thumbs down. I had to create and craft a sound for the band reflective of the world they now exist in.

Creator Brian Ralph said that Ferris Bueller’s Day Off was his biggest inspiration for Daybreak.  Did you go back and watch this film before beginning work on this show?

It’s definitely a favorite of mine… and I often say “Bueller!” to my friends when the moment fits. In working on “Daybreak”, I was so impressed that Brian Ralph had taken his inspiration from Ferris and really owned it, giving the series its own unique life (and Matthew Broderick’s presence is absolute icing on the cake!!)

What sort of preparation did you do for your job on Daybreak?

Well… there are plenty of random experiences from my life in there! But specifically, I spent a bit of time playing around with the sonics of the instruments I had at my disposal. I gravitated to more raw and rustic tones and then applied that sensibility to my approach to the producing of the tracks themselves. Guitars, Bass, Drums and any other instruments that I had hidden in between the layers, all had to be rough, not smooth, crass not suave and have zero sophistication!

You reinvented songs from bands such as Smashing Pumpkins, Men Without Hats, Air Supply, and Morrissey. When you redid these songs did you make sure they each followed a common trait or vibe?

Smashing Pumpkins was a solid point of departure. With “Today”, I just wanted to trash it up a little, drive it in a more industrial direction with an air of garage band angst and edge. This version more closely reflects the world they all now exist in. Being the first of the songs performed, it helped introduce the identity of the band that then gets pushed in a variety of directions (via the diversity of the songs that occur throughout the rest of the season). Then the fun flowed! I’ve always loved taking an approach to one type of instrument and apply that to another. For example, I have a Mini Moog I often approach as a guitarist, and in turn, attack my guitars like I would a synthesizer. An 80’s track like “Safety Dance” has a firm synth presence… but there’s no synth onstage onscreen. So, I took a guitar and replaced the filter sweeps with a wah pedal… and swapped out the LFO for a tremolo pedal. By nature, you pay respect to the song by cross-pollinating from one type of instrument to another – therefore, making it its own unique “thing” (well that’s the theory anyway!)

Why do you think you were chosen to work on this show?

I have to thank Andrea Von Foerester (Music Supervisor) for that! They asked her and she asked me. We’ve known each other for a number of years and have worked together before. She was tasked with the job of finding a music producer and she called me. Andrea obviously needs to present someone who she trusts personally and professionally in these situations… so as soon as she called me and I said yes, then we were both on the journey together. I believe you need to prioritize your colleagues as much as yourself.

Are there songs that didn’t make it into this season that you wish would have?

I think everything that was decided upon made the final. As a composer, you can’t afford to get too attached to anything you do… but you still have to care about it just as much! It’s no different as a music producer. I always believe that everything you do is worth something – whether it is discovering new territory on your own journey, or creating a piece of music that eventually finds its way off a hard drive and into the world… I believe it all works out in the wash.

What do you hope people who watch this show will walk away saying?

With my own work, the most important thing for me is to create something compellingly unique that really touches and engages people; so in turn, that’s what I would want for the audience of “Daybreak” to experience (as I’m sure the show-runners and all involved would also desire from our collective work as a whole).