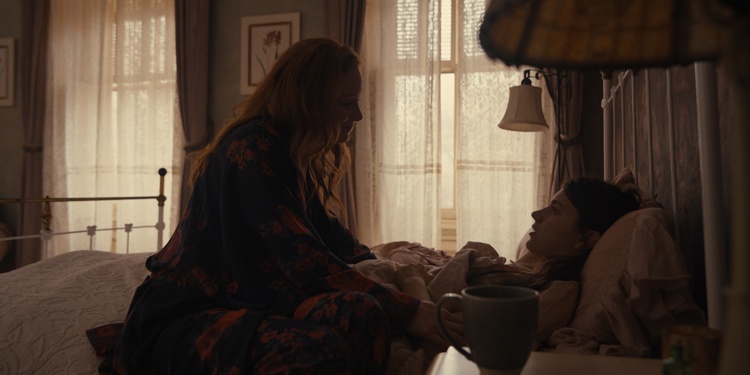 Fans are eagerly anticipating the upcoming premiere of the new Apple TV+ series “Servant” from executive producer M. Night Shyamalan and starring Lauren Ambrose, Toby Kebbell, Rupert Grint, and Nell Tiger Free! “Servant” will begin streaming on Thursday, November 28th with the first three episodes and then a new episode will continue to roll out each Friday.

We seriously cannot say enough good things about the upcoming series, as it had just hooked from the very start! It is our hope that “Servant” will receive the true recognition it deserves! We recently caught up with series stars Lauren Ambrose and Nell Tiger Free, as well, writer/executive producer Tony Basgallop to delve a bit deeper into their characters, discuss some of the various themes and symbolism within the series and more!

When discussing the various religious themes found throughout “Servant”, Tony Basgallop comments, “I think it is more about faith than any particular religion. It’s about looking for a solution and it’s about trying to reason out an argument that you can’t process yourself, I think, for me, that’s what religion is … I don’t have a religion of my own but I respect those that lean toward that so, I think the religious imagery in there is attached to Leanne as a character. It’s her belief system that she’s being raised in and I feel like it’s very strong. There is something mysterious and where I would say nothing does or doesn’t exist.”

We asked Lauren Ambrose what it was like to peel back the layers of Dorothy’s character and if there was anything she was surprised to learn, she revealed, “I just relish the opportunity to play this character. I feel honored to bring this character to life, I mean, she is dealing with so much and dealing with it in such a bizarre way and the writing is so beautiful, thanks to Tony! When I saw the script I was like, how on earth can I do that, she’s so fragile, but also so big and presentational and very type A, so everything is perfect in her life, but she has this giant failure. The character breaks my heart. For me, as an actor, I work to make things as personal as possible which is easy because on the surface this character is a mother going back to work and I’ve had that experience, but to figure out how to let all of her little cracks come out and when there are cracks in the veneer. I get to work with beautiful actors and incredible artists, so it’s been really fun. It’s best to have a character that is such a challenge.”

Talking about some of the more mysterious or mystical elements of the series, Nell Tiger Free tell us, “I think what is so great about the show is you doubt everything that you see and you can start the episode firmly believing that my character and the things that happen in the house are one thing and you will end the episode thinking completely differently. I think that’s fun to play for us because we give you something and you’re like this can not be explained, but then we explain it. I think that is the to and fro of the series … you think you know what you’re seeing but you really don’t.”

Ambrose adds, “The characters all react in different ways as well. One might think it’s a miracle while another has a more realistic explanation for what’s going on.” Basgallop says, “From a writing perspective, how can you write a story that can be viewed in two different ways. It comes down to you as a viewer, do you have faith or do you believe in miracles or do you question everything you see? That is where we divide the characters and the audience at the same time. You should be able to watch this show and think, ‘oh, my God miracles are happening’ and that the same time you can look at it and go ‘that young girl is really exploiting this family and their desperation’, so are you watching a miracle or are you watching a crime? It has to work on both of those levels, it’s challenging, but I got it!”

When asked how far out they have the story planned, as the end of the series, we feel definitely leaves room for more without giving any spoilers away. Basgallop says, “There’s always an end game with writing, but I think I try not to say I know every little step because something happens in every episode where I learn something new about the characters or something and I find a crack in there that is worth burrowing into, so there is definitely a lot of forwarding momentum going into season two. We know what’s been lost and we know what the characters are striving to gain. As long as you see the desire in the characters there’s more story to tell.”

You can view our entire interview with Lauren Ambrose, Nell Tiger Free and Tony Basgallop below: